Will Monero, Dash, Zcash, And Other Private Coins Be Delisted?

Bitcoin and other cryptocurrencies draw more and more attention from regulators and politicians around the world. Governments openly pursue monitoring of transactions. They tend to restrict or ban digital currencies that make the monitoring job harder.

The most well-known example is the set of guidelines for the cryptoindustry released by the FATF. According to the document, Bitcoin exchanges and other Virtual Asset Service Provides have to observe KYC, AML, and CFT procedures like traditional finance companies. However, the decentralized nature of cryptocurrencies gets in the way of observing the guidelines to the letter.

In Bitcoin and some other altcoins there are ways to implement at least some form of surveillance. But when it comes to so-called “anonymous cryptocurrencies” this isn’t exactly the case.

This is an interesting precedent that may have a significant influence on anonymous cryptocurrencies. Some experts suggest that mass delistings may leave such coins in oblivion.

Is it that bad?

The first signs of troubles anonymous cryptocurrencies were going to face emerged back in March, 2018. Japanese cryptoexchange Coincheck delisted Monero, Dash, and Zcash.

At that time, FATF Guidelines weren’t there yet, so the delisting has happened because of the changes in the national AML and CTF introduced by the Japanese Financial Services Agency. The changes are, in turn, tied to the notorious hacking scandal when Coincheck lost over $500 million in NEM.

Soon it became apparent that Coincheck wasn’t the only Japanese exchange to face the consequences of this event. By June, 2018, anonymous cryptocurrencies were banned across Japan. The regulator insisted that this decision will make the crypto industry safer and more transparent.

The reasoning behind the ban boiled to the fact that anonymous cryptocurrencies are being used for money laundering and other illegal activities, while making it impossible to track down the owner of a particular coin.

Japanese regulators were especially interested in Monero. This is presumably related to the reports that North Korea sees this cryptocurrency as a way to bypass sanctions. At that time there was a significant chance that North Korean hackers may have to do with Coincheck hack.

Jumping On the Bandwagon

Japan isn’t the only country where anonymous cryptocurrencies are officially banned. The country was the first to legalize cryptocurrencies and define the legal framework for exchanges. Unsurprisingly, other countries tend to keep an eye on its decisions.

Back in June 2018, the US Congress proposed to implement additional measures to react to the rise of private coins.

Within this initiative, the deputy assistant director in the U.S. Secret Service’s Office of Investigations Robert Novy asked to extend the authority of the law enforcement to let them confiscate “digital evidence” from private companies, even if the latter refuse to disclose users’ data.

The US approach to political decisions doesn’t allow for a proposal like this to be approved yet. But this doesn’t mean that the secret services have lost their interest. Just at the end of last year, the US Department of Homeland Security revealed its plans to look for ways of analyzing transactions made with private coins.

The Japanese example inspired France more than others. In March, 2019, the president of the local National Assembly Erik Woerth proposed to forbid anonymous cryptocurrencies. He used the typical reasoning: anonymous coins can be used for illegal activities.

What Do Developers Of Anonymous Cryptocurrencies Say

Representatives of anonymous cryptocurrency projects usually note that the exchanges acted hastily and the reported anonymity of such currencies won’t get in the way of transaction monitoring.

“Dash is identical to Bitcoin and is 100% capable of meeting the requirements. At times, this requires some education as to why there are no legally definable differences between a Dash and Bitcoin transaction,” Ryan Taylor, chief executive officer at Dash Core Group Inc. told Bloomberg.

Dash uses PrivateSend mechanism based on CoinJoin technology. The mechanism obscures the link between the sender and the recipient. However, Taylor noted that Dash partnered with analytical companies BlockchainIntel and Coinfirm that cooperate with law enforcement and are capable of providing the necessary information.

Electric Coin, the company behind Zcash, also insisted that their cryptocurrency can fit the FATF guidelines if necessary. In his article Jack Gavigan, the Director of Product and Regulatory Relations at Electric Coin, argues that Zcash fits the guidelines more than any other virtual asset.

“Under the FATF recommendations, VASPs are required to undertake CDD measures when establishing a business relationship. The fact that a VASP supports Zcash or that a customer intends to trade Zcash does not impact the VASP’s ability to carry out CDD checks. In this respect, Zcash is no different from other virtual currencies such as Bitcoin or Ethereum, and VASPs can apply the same CDD processes,” Gavin wrote in the article.

He noted that in a Zcash transaction it is possible to include the information about the sender and the receiver. Additionally, service providers can monitor deposits and withdrawals, as well as compare patterns and volumes of transactions with the expected behavior. Gavigan has also provided screenshots to show how the information can be put into a transaction: 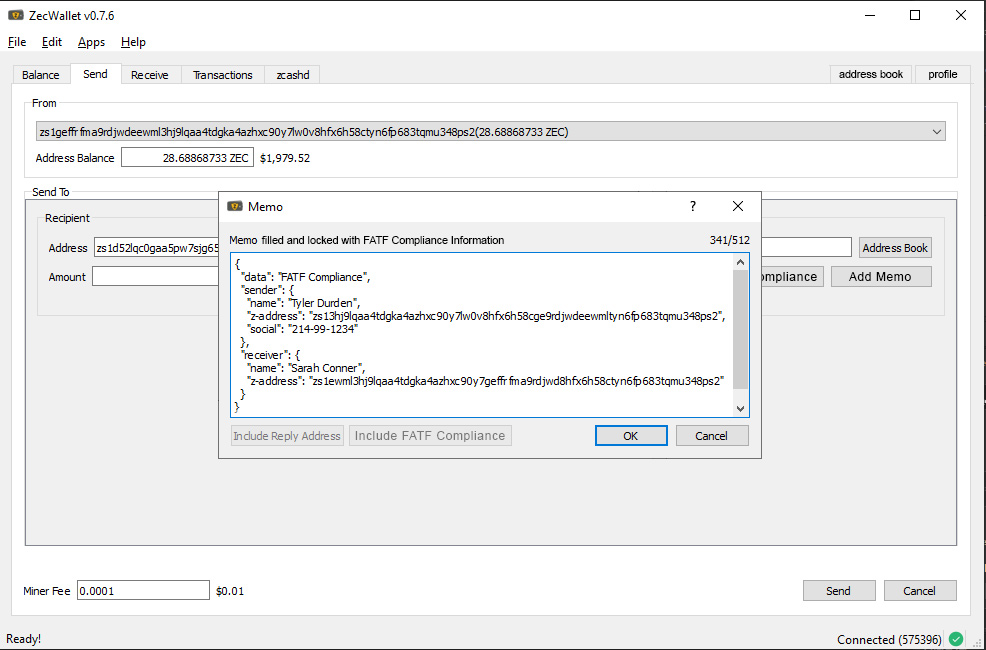 Monero’s situation with the regulators is a lot more complicated, as it took anonymity seriously. The protocol doesn’t allow you to tie any of the parties to a particular person. It uses circular signatures and built-in coin fungibility to hide transaction sums. It even has stealth-addresses.

Monero developers note that there is a function called View Key that allows monitoring incoming transactions for a particular address. However, it isn’t sufficient for full-fledged surveillance.

Nobody knows for sure, but some experts believe this might be the case.

Earlier this year, an analytical company Chainalysis published an open letter to FATF urging the regulator not to stricten the rules for the crypto industry too much. The authors of the letter emphasized that the existing exchange infrastructure doesn’t allow to identify the recipient every time. There is also no way to find out if the recipient uses a personal wallet or a VASP.

It gets worse, considering that for exchanges it is still easier to delist private coins, than to invest money and effort into observing FATF recommendations.

“There is a good chance many will be delisted and liquidity will dry up,” Jeff Dorman, chief investment officer at Arca said to Bloomberg.

Do you think privacy is a fundamental right? https://t.co/TZaVT5Uis4

The recent news that Coinbase will support Dash was even more fascinating. When the largest cryptocurrency company in the US that is clearly acting within the regulatory restrictions adds a private coin, the whole situation looks much less grim. If only more companies wanted to solve the problem, not to keep avoiding it.

To be fair, Coinbase UK delisted Zcash in August. However, it happened because the platform switched to a different banking partner. Previously Coinbase UK worked with Barclays, but now they work with ClearBank that didn’t like the stealth-addresses feature, whether or not it is being used.

At the moment all three of the largest anonymous cryptocurrencies are well represented on the largest cryptocurrency exchanges, so it is still too early to talk about the extinction of private coins.

Confidentiality is becoming more and more sought after and the government trying to control people’s lives isn’t the only problem. Confidentiality is required for numerous business-related activities and cryptocurrencies are seen as a way to achieve it.

Prohibition won’t solve the problem of illegal activities. Monero, Dash, and Zcash are the largest private coins, but more and more new coins appear. It is hardly viable or even possible to ban them all.

Beam, a cryptocurrency launched in early 2019, is one such solution. It is still too young to boast a significant market cap, but the price dynamics look very promising. In June, when the FATF guidelines came through and the regulators became harsher towards cryptocurrencies, Beam price began growing rapidly. Another good news for the project was the recent listing of the coin on Binance. 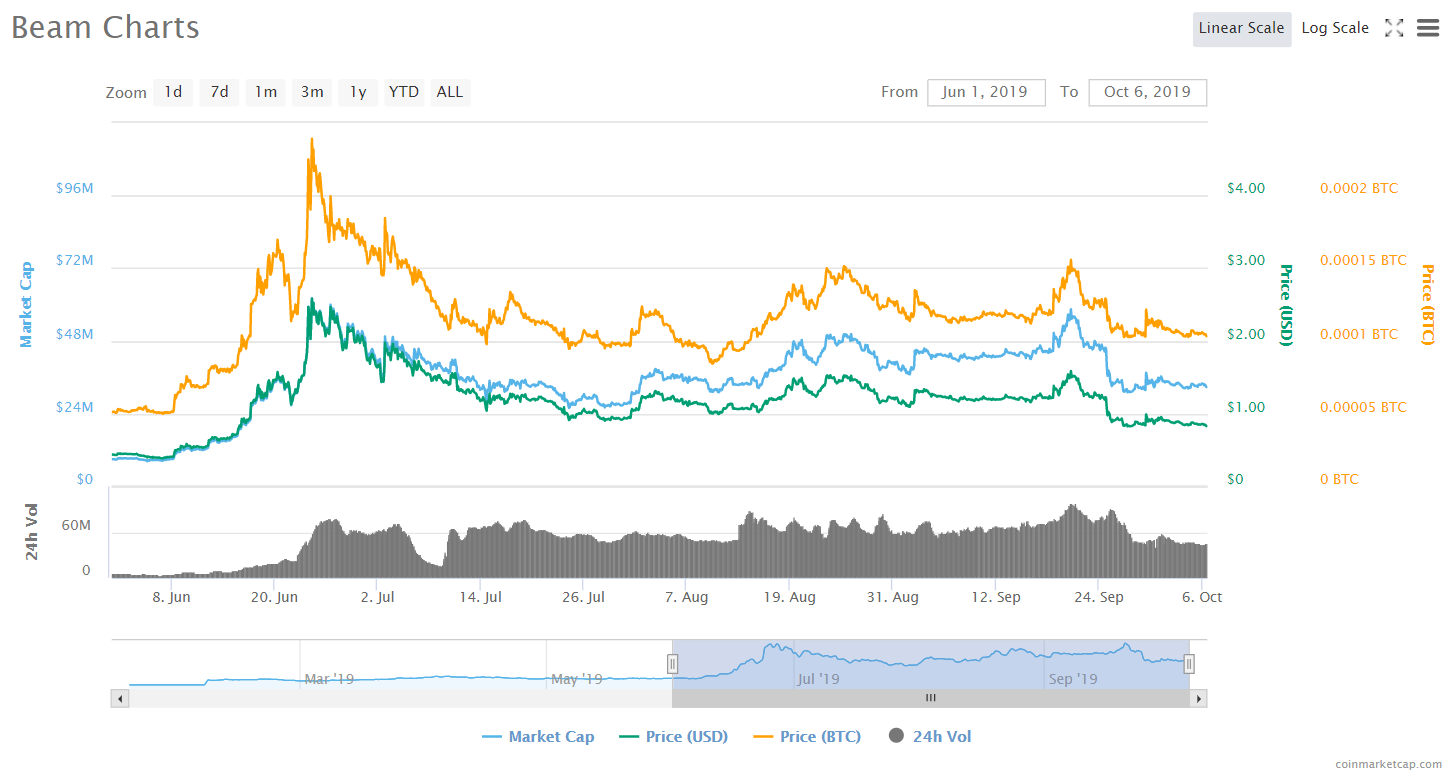 If the Worst Happens

Even if mass delisting actually occurs, it won’t be the death of private coins. The demand for such solutions will remain high, therefore anonymous cryptocurrencies will simply migrate from the regulated exchanges to decentralized and P2P platforms. Alternatively, they will be traded in jurisdictions outside of FATF’s influence.

Earlier, Chainalysis representatives noted that regulated exchanges could become useful allies of law enforcement. It is crucial for blockchain developers and service providers to educate the regulators, or they will all suffer from the delisting.