Safety Over Freedom: How Governments Introduce Surveillance Under Veil of Coronavirus Control

“A big battle has been raging in recent years over our privacy. The coronavirus crisis could be the battle’s tipping point.”

That’s a warning from a Financial Times’ article by Yuval Noah Harari, the author of “Sapiens,” about the loss of freedom in a time when many are willing to sacrifice everything for the feeling of safety before an uncertain future.

The COVID-19 pandemic is spreading fast. According to the data by John Hopkins University, the virus already got to 184 countries across all continents except Antarctica with 1.3 million confirmed cases of the disease. 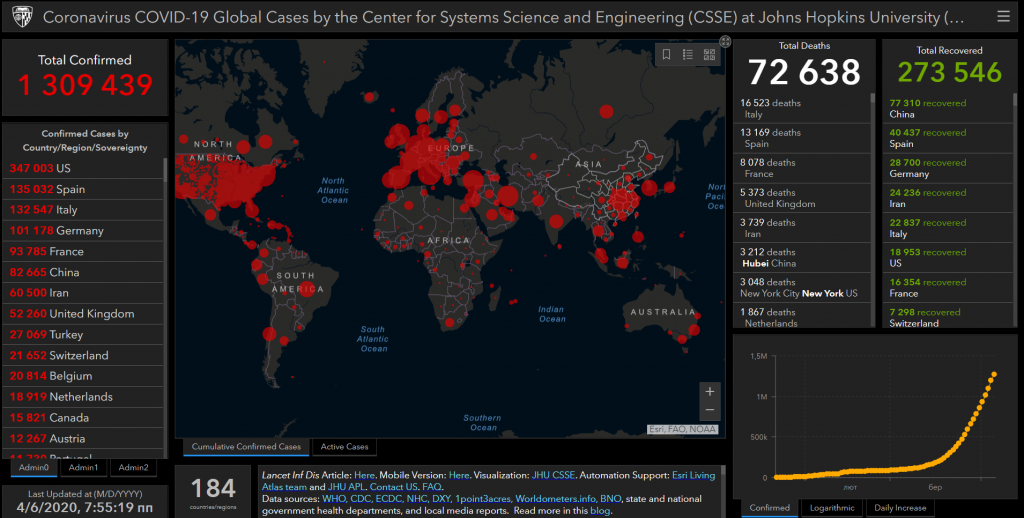 Multiple countries have declared a state of emergency, closed off air traffic, and initiated quarantine measures to fight the virus. Aside from that, governments are introducing surveillance systems aimed to slow down the pandemic by controlling the infected people. The main tool for this job is technology.

In this piece, we investigate how different countries use smartphones, CCTV, and biometrics to fight the coronavirus, and look for the line between collecting data to protect people and total surveillance.

China as the Role Model

The first experiment with monitoring citizens took place in China, where the first virus outbreak was observed.

In January, the coronavirus began to spread across the country. Since January 22d, Wuhan, the place where the epidemic started, was quarantined. The adjacent territories were put on lockdown shortly after.

On January 30th, the WHO declared a Public Health Emergency of International Concern. On March 11th, the outbreak was declared a pandemic.

"We have therefore made the assessment that #COVID19 can be characterized as a pandemic"-@DrTedros #coronavirus pic.twitter.com/JqdsM2051A

By the end of March, where Europe and the U.S. topped China by the number of infected, the latter lifted the strict quarantine in Wuhan.

Considering that the virus is only gaining steam in other countries, the quick victory was attributed to the local authorities. One of the main techniques other countries are going to borrow from China is apparently total surveillance.

China Under the Watchful Eye

The surveillance system is one of the measures adding up to quarantines and record-breakingly fast hospital construction projects.

Alipay Health Code app was first launched in Hangzhou and then in hundreds of other cities. By the middle of February, the system was considered to be able to cover 6.5 million people.

The app development was supported by the local authorities and a fintech company Ant Financial, a subsidiary of Alibaba. A similar app was launched by Tencent in Shenzhen

Chinese citizens were registering via AliPay or WeChat, answering questions about their health, and submitting their movement history. The data were also automatically pulled from the databases of Tencent and Alibaba.

The app processes the data and assigns a citizen with a color code. Green code holders are allowed to move freely, yellow code holders have to stay at home for a week, and red code holders for two. The app also generates a QR code that the user should scan each time they are leaving the house. Ant Financial hasn’t disclosed the logic behind status attribution

The New York Times specialists analyzed the code of the app and found out that the system doesn’t just decide if a user poses infection risks. It also sends personal data to the Chinese police.

The app meant to fight the coronavirus became a perfect addition to the social credit system China has been building since 2014. It may even be its final missing piece.

Another interesting thing is that scoring functions and control over the test social credit system were managed by Ant Financial, the company behind the coronavirus app.

To eliminate any doubt left about personal data being handed over to the authorities, there a notable speech by Alibaba’s Jack Ma from 2016. Back then, he explicitly called law enforcement to use internet data to fight terrorism.

In addition to apps, the Chinese government also has a large-scale CCTV system with facial recognition. The idea of the project is to be able to identify any of 1.3 billion citizens in 30 seconds. China is planning to deploy the network across the entire country in 2020.

The pilot project took off in Xinjiang. Together with the social credit system it became a tool of total government control over people’s lives and led to large-scale discrimination.

“China is moving towards a totalitarian society, where the government controls and affects individuals’ private lives. This is like Big Brother, who has all your information and can harm you in any way he wants,” novelist and social commentator Murong Xuecun told The Washington Post back in 2016.

In 2020, these words may apply to more places than just China.

Article 12 of the Universal Declaration of Human Rights states:

“No one shall be subjected to arbitrary interference with his privacy, family, home or correspondence, nor to attacks upon his honor and reputation. Everyone has the right to the protection of the law against such interference or attacks.”

For cryptocurrencies, this is one of the cornerstone ideas. The need for privacy protection drove the development of cryptography and cypherpunks became a kind of privacy guardians.

The privacy-or-security discussion has been going on for years. With new digital technologies, it is one of the main ethical problems of human society. Still, the coronavirus can push people to solve the dilemma right about now.

The all-encompassing and uncompromised surveillance methods used by China have been known for a while. But now very similar measures are being introduced in the countries that were criticizing China for the very same methods.

A Russian non-profit organization Roskomsvoboda launched an interactive map showing the extent to which the governments of particular countries violate people’s privacy. 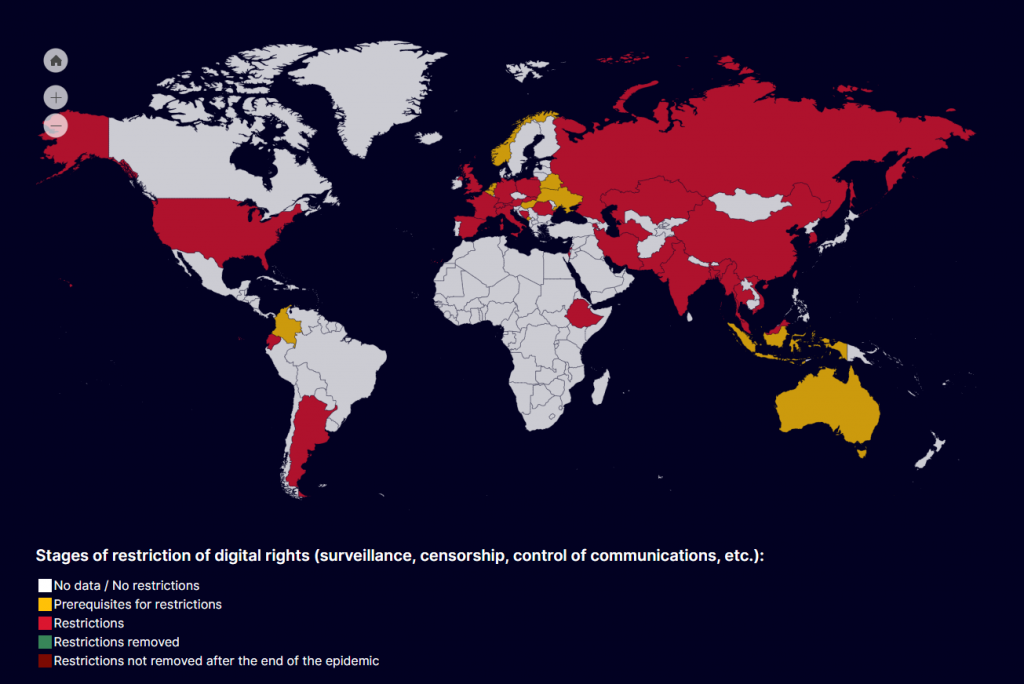 “In many places in Europe, Asia, and the U.S. there are certain limitations and monitoring measures being introduced. It is important to understand how these technological solutions will be taken down after the quarantine. The public should watch for these tools not to remain in the hands of the authorities,” Rockmosvoboda’s Artem Kozlyuk told ForkLog.

In the U.S., the authorities keep track of people’s movement via advertising data. In South Korea, there’s a public map allowing to check for possible contacts with infected people, which is based on the data from cell phone operators, credit cards, and interviews with those who caught the virus. And Israeli special services no longer need permission to track infected people’s cell phones. In Europe, countries use anonymous data provided by cell phone companies and CCTV systems. Russia was a bit late to the party but since April 2nd, there’s a monitoring app for self-isolated coronavirus patients. The country is also reportedly using data from cell phone operators and CCTV.

“Without adequate tracking, there is a danger that these new, often highly invasive, measures will become the norm around the world. Although some may appear entirely legitimate, many pose a risk to citizens’ right to privacy and freedom of expression,” said Samuel Woodhams, Digital Rights Lead of Top10VPN service monitoring the measures that are meant to slow down the virus but also violate privacy.

Experts are almost equivocally wondering whether the surveillance measures will be properly removed after the pandemic ends and the quarantine is lifted.

“In not-entirely-democratic regimes, the risks of the measures staying are near 100%. In countries like China, Iran, and probably Russia, these systems won’t be removed and will be further used outside of their initial purpose and outside of public control,” stressed Artem Kozlyuk.

Our privacy, personal data, and the right to freedom depend on how bad do we want to protect them.

“Even when infections from coronavirus are down to zero, some data-hungry governments could argue they needed to keep the biometric surveillance systems in place because they fear a second wave of coronavirus, or because there is a new Ebola strain evolving in central Africa, or because . . . you get the idea. A big battle has been raging in recent years over our privacy. The coronavirus crisis could be the battle’s tipping point. For when people are given a choice between privacy and health, they will usually choose health,” wrote Yuval Noah Harari.

But what if we don’t have to choose? The article about the right to education in the Universal Declaration of Human Rights doesn’t take away the right to property. Why do we have to sacrifice our freedom for security, if we can have both?