As the Bitcoin markets settle down, it’s still not clear how the price of the first crypto will develop, given the tough time entire nations’ economies are going through.

In this piece, we share the perspective on Bitcoin price dynamics from a professional trader and ForkLog Hub resident Pavel Gromov.

After the shocking crash of the 12th–13th of March, the markets are now comparatively stabilized.

Over the last weekend, Bitcoin stayed in the $4,800–5,800 range. The news about the Federal Reserve cutting interest rates was enough to push the price towards $5,900, but then Bitcoin went back to $5,000 and stayed there.

As for traditional finance, the regulators are trying to keep the markets from falling further by pouring more money into the economy. This doesn’t work anymore, as the markets are engulfed in fear and the news about such infusions concerns investors, rather than incentivize them. This means that the Fed is acknowledging the scale of the problem. They announced lowering the interest rates to nearly zero. As a result, oil is crashing, so do the Asian markets. European and U.S. markets are likely to follow the same path soon.

The coronavirus panic harms the economy: closed borders, quarantines, entire industries slowing down or grinding to a halt entirely. A few months will have to pass before we are able to really assess the damage.

This is happening in an overpriced market that has been growing for the last ten years. On may suggest that the 20% decrease may have been just the beginning. According to the results of this year’s first two months, China’s economic indicators were falling. Since China is the leader of international trading and the situation there reflects on the world’s markets, this may drag the world economy along.

What to Expect From Bitcoin?

I’m anticipating the correlation between the cryptocurrency market and S&P 500 to weaken. If the index is to fall, Bitcoin will not be following it as close as it did last week.

Only margin traders who expect Bitcoin to go below $4,000 are going to sell it. I think they won’t be able to fulfill a huge amount of orders from people who want to buy lower than $4,500.

I would expect the first crypto to move within the $5,800–4,200 range with potential dives to $3,800. I doubt that it will go lower whatever happens in the traditional markets.

If the traditional markets are to rally, Bitcoin will quickly get back to $6,200 and continue to grow.

This week will put these suggestions to the test. 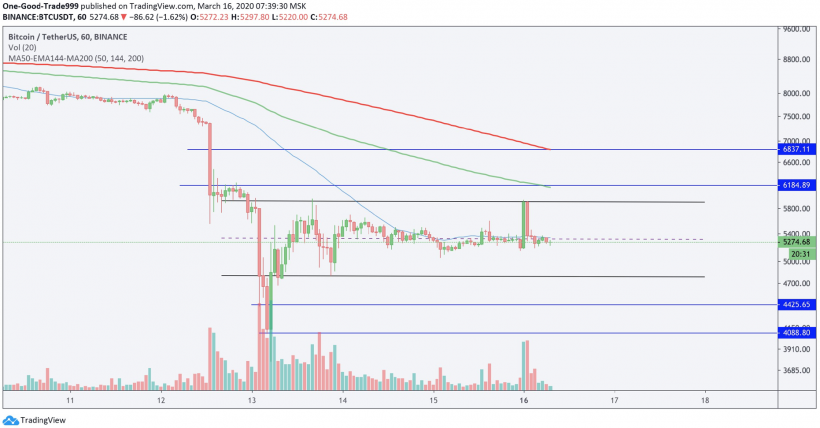