Over a Gram of Trouble: What Happened to People Who Bought Gram Futures

While it lasted, Telegram’s TON project has been a tempting target for investors. A few managed to get into TON’s private token sale while the rest had to wait till launch or look for futures contracts for Gram tokens, which were offered by several trading platforms.

When, following prolonged litigation with the SEC, the original developers terminated the TON project, the money invested in Gram futures ended up in limbo. Some investors got their money back, others not so much. ForkLog turned to real cases to figure out what happened.

A cryptocurrency trading platform BitForex started offering Gram futures back in July 2019. The holders of the futures would have been able to buy out the tokens at 1:1 price after TON is launched, which was expected to happen on October 31st, 2019.

On May 12th, 2020, Pavel Durov announced that the original team will cease working on the project. Unable to fulfill the contracts, BitForex had to close the trading pair and cancel all the Gram futures deals. The decision came through on May 16th. Much to users’ surprise, the reimbursements for those deals amounted to about 2% of the initial investments.

“Instead of the actual $0.5 per futures, they repaid only $0.01. Out of all the money they got they’ve only returned 2% for some unexplained reasons. I had 8094 Gram futures. The platform locked them and paid me only $101,” Oazisdemyanovi said.

The user explained that for 8 months since October 2019, Gram futures were sold for $2 on average.

“People were buying and selling for $2. Five hours before the pair has been closed, BitForex artificially dumped the price to the minimum, filled the order book with hundreds of thousands of cheap futures that came out of nowhere, and closed trading. They paid Gram futures holders $0.01 per contract,” BitForex user explained.

After the incident, Oazisdemyanovi asked for help in the BitForex Russian chat in Telegram. The user said that the chat administrator immediately deleted his post and blocked him. 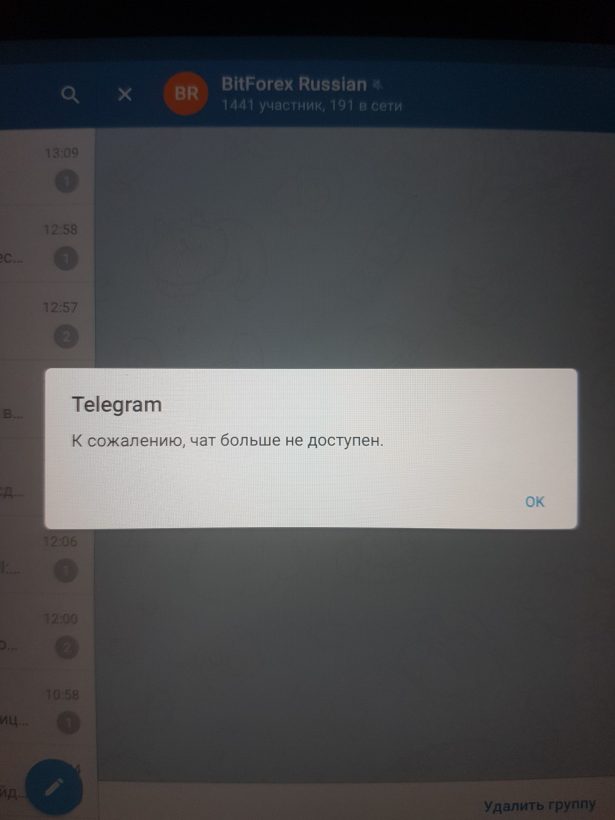 Telegram screenshot, the message reads “Unfortunately, the chat is not available.” Source: captured by Oazisdemyanovi

“I’ve also contacted BitForex support. They sent me a standard response and didn’t react to the next three messages,” he added. 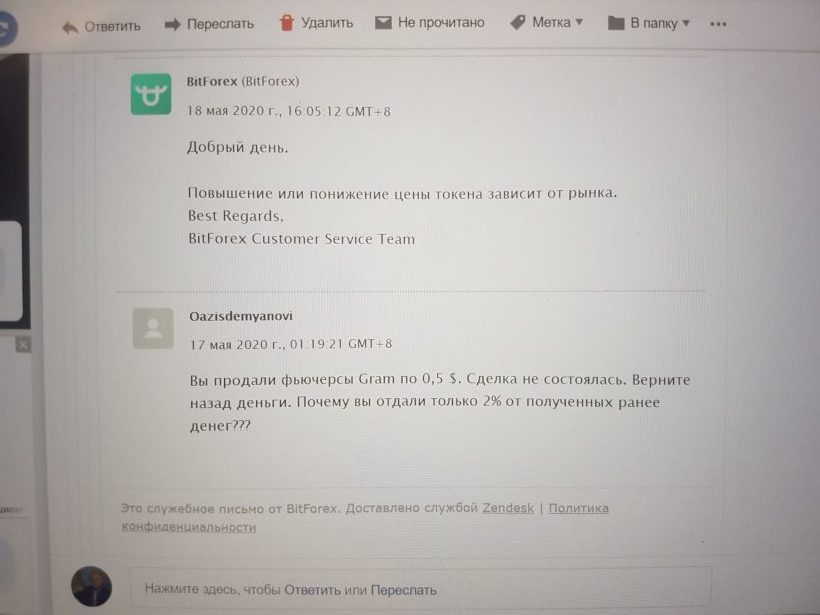 Screenshot of the conversation with BitForex support. The user asked why the platform returned only 2% of the money, the support explained that token prices depend on the market. Source: captured by Oazisdemyanovi

“I’ve invested about $35 thousand and they returned $27. There are messages from the platform’s support but no good news,” one of the users said.

Another user purchased 200 Gram tokens for $2 each, but the exchange reportedly repaid them only $0.0125 per token.

Similarly, a user Andry M didn’t get to profit from Gram futures:

“Initially, I was buying about 30 Gram for $2 each. In the last days, hoping that the platform will pay for the tokens at the market price I’ve bought 250 more. The return price was $0.01.”

All of the clients reporting said there were no additional payouts or benefits offered by the platform.

When contacted by ForkLog, BitForex representatives first said that the end of Gram development is unfortunate:

According to BitForex, the idea behind the futures was “to reflect the value of Gram in the market and allow all users who can’t access initial investments in Gram to take part in this historic moment.”

The team said that to provide liquidity and parties to the deals they offered users collateralized loans for Gram tokens.

“The price drop is the result of the users’ trading and profit strategy. Since caring about users is our primary value, we will offer compensations to different categories of users who took part,” they added.

After the trading was closed, Gram holders received a $10 bonus applicable to new perpetual contract positions.

ForkLog also asked about the “hundreds of thousands of futures” placed on sale and the “artificial price dump” mentioned by Oazisdemyanovi.

“The order book for Gram sales consisted of purchased and collateral tokens. The crypto-market tends to follow trading trends, especially when there is terrible news. This is the force of the market and the pressure from traders combined,” BitForex answered.

Other Platforms Selling Gram Before It Was a Thing

In June 2019, a Japanese crypto-exchange Liquid announced that it is preparing to sell Gram tokens obtained from a relatively obscure South Korean company Gram Asia that allegedly served as an incubator for TON.

The Gram Token Sale is coming to Liquid.

For the first time, members of the public will be able to buy Telegram's sought-after $Gram tokens. $QASH holder benefits included.

Back then, one of TON investors noted that they never heard of Gram Asia before, although the company called itself Asia’s largest Gram token holder. Its domain name has been registered two weeks prior to Liquid’s announcement.

Initially, CEO of Liquid Mike Kayamori claimed that the sale of tokens from the third-party fund is part of Telegram’s official strategy, but he later admitted that Telegram has nothing to do with the listing on Liquid. The deal was about derivatives, not tokens, and took place only between the exchange and Gram Asia.

Liquid promised that the buyers’ funds will be kept in escrow until Gram tokens are available and the platform won’t be able to use the money.

The sale began on July 10th, 2019, and lasted for about 60 hours. The platform offered 12.5 million tokens in total at $4 per Gram. Many potential buyers thought that the price is too high.

Opinion about the price found on Twitter. Source: Bloomchain.ru

According to Liquid’s marketing, the majority of buyers were from Russia.

“We haven’t published final sales data yet, but I can say that Russians were the most active Gram buyers. We are happy with the results. Everything went well on our side,” a Liquid spokesperson told Bloomchain in August 2019.

After the sale, the platform nearly stopped mentioning Gram in social networks. By January 2020, Liquid had to return all the money to investors since TON didn’t launch in October 2019, which was the main condition of the sale. 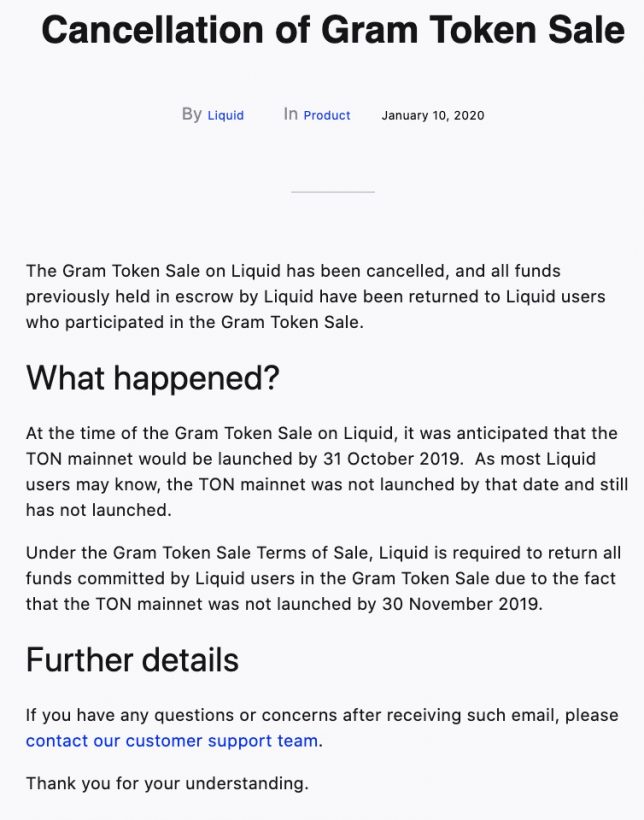 A week before the start of Gram sale on Liquid, a crypto-loan company Nexo announced loans with Gram as collateral. They later clarified that the feature was to be expected after TON launches.

To strengthen Telegram’s TON blockchain, Nexo will onboard Gram tokens as a collateral option for Nexo's signature Instant Crypto Credit Lines ™.
Gram tokens will be available for the first time to the public via @Liquid_Global’s token sale on July 10.https://t.co/ySZ5oxqDIT

At the end of July 2019, an Azerbaijan-based exchange Cross Exchange offered about 277 thousand Gram tokens for the platform’s native token XEX.

【Selling price】
1GRAM = 3.2 to 3.7 USDT
Check out the full terms and conditions for Gram token purchases✅

Gram sales boom of 2019 isn’t hard to explain: multiple delays of the TON launch forced investors to get rid of the tokens on the secondary market in violation of the SAFT contract.

The list of sellers included several OTC platforms and crypto-exchanges, as well as at least one investment fund. The seller’s benefit was obvious: Gram price on the secondary market fluctuated between $1.60 and $2, while the prices in the 1st and 2nd rounds were $0.37 and $1.33 respectively.

Scammers jumped on the opportunity as well. People have received letters offering to buy Grams and inviting them to take part in an ICO. 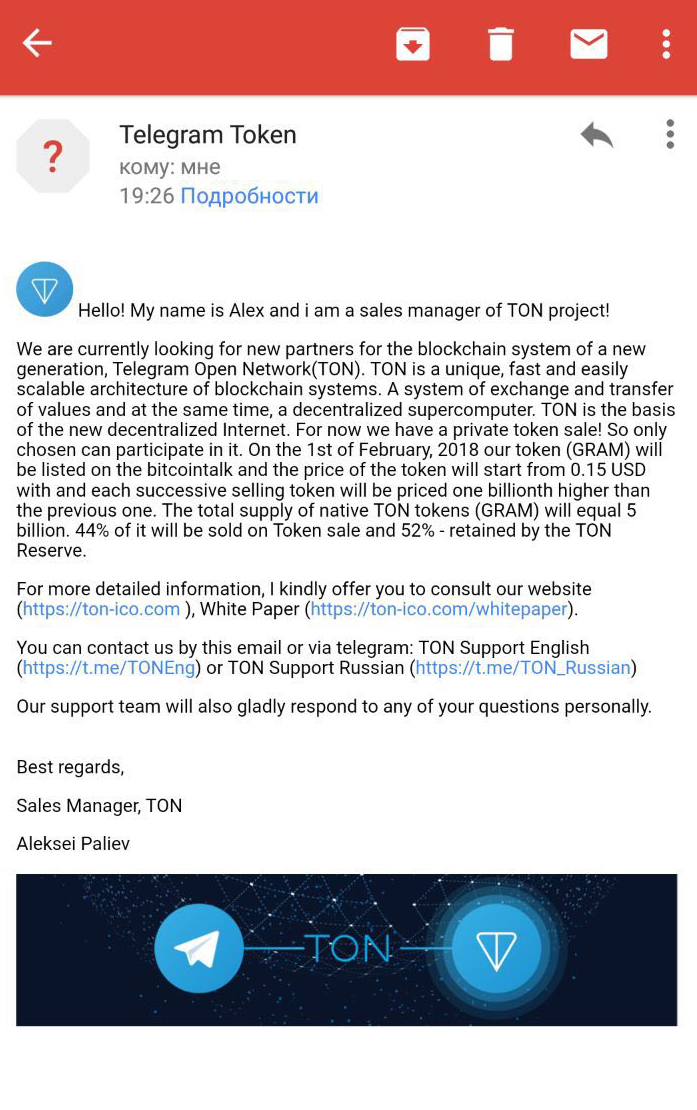 Scam communities popped up in social networks and at one point, there was a scam website posing as ForkLog. The veil of secrecy around TON and comments from its developers being few and far between made scammers’ task easier. It took until November 2019 for Telegram to officially advise against buying Gram tokens on third-party websites.

The end of the Telegram Open Network story is both expected and unpredictable. People were anticipating Pavel Durov to fight, but it turned out that the end of the project was the main aspect of a peaceful settlement with the SEC.

This is an adaptation of the original Russian-language article at ForkLog.com and some sources are only available in Russian.