Opinion: BSV May Look More Like Joke, but There’s More to It

Craig Wright is undoubtedly a famous if not notorious figure in the crypto-industry. The entrepreneur has been involved in several notable controversies and is one of the most polarizing celebrities for the crypto-community.

The last few days were quite busy for Wright, as he was litigating over a case involving a stash of 1.1 million BTC they mined together with David Kleiman.

While the case is an important story in its own right, it might have also affected the recent BSV price surge that had been unexpected to many, considering the negative publicity.

On January 14th, the price of BSV started rising, reaching the level of $450 per coin on some exchanges. For comparison, in December 2019, BSV was worth around $70. Yet, as soon as Craig Wright has been proven to have no access to the stash, BSV plunged and is currently remaining below $300.

forklog.media editorial board was sent an insightful article on the matter, providing certain unintuitive and potentially unpopular opinions. Below you will find the text with a few corrections concerning wording.

Obviously, it’s not the “mass adoption” we’ve been waiting for that was pumping BSV price. Classically, the prices are manipulated heavily by crypto-whales.

Some experts even advised traders to ignore the price moves of BSV. It appears that the majority of the volume came from a few shady exchanges without strict KYC/AML policies, presumably conducting wash trading.

I just leave this here and anybody who can read and understand will get the message. pic.twitter.com/pRrMfBL9Yv

Also, @jronkain wrote that Craig’s fans were complaining that people who control Bitcoin right now are using Tether to manipulate the price. At the same time, they said, Bitcoin SV is experiencing the “natural demand.”

However, more than 55% of BSV volume is connected to Tether’s USDT activity. Bitcoin and Ethereum are the second and third assets used to pump BSV.

Oh, do you remember BSVtards complaining about BTC been pumped by Tether but BSV has "natural demand"…

Assuming that many of the crypto-exchanges conduct wash trading, the volumes are likely overstated. CoinText CTO Vin Armani, believes it is Calvin Ayre who stands behind the recent pump, not the natural demand from people who believe Craig Wright’s tales:

The mechanics of the BSV pump is pretty interesting. I've been watching this develop for days.

No one but Calvin is mining BSV. Adding more hash doesn't get him more BSV.

The Arcane Research analysts add that Craig Wright has pumped the market of Bitcoin forks (BCH, BTG, BSV, etc.) by promising to obtain the keys. They also point out the fact that on January 15th, BSV had a bigger trading volume than BTC, while the liquidity remained low. 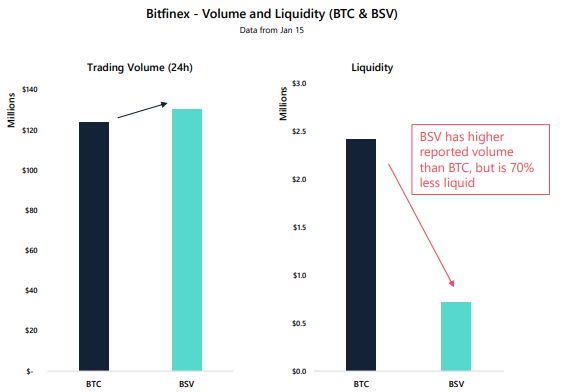 Any News Is Good for Wise Traders

When Binance’s CZ started the BSV delisting flashmob in May 2019, many of the industry stakeholders supported him.

Some people understood that the delisting drama is a big trading opportunity. The good news about a project usually pumps up the prices of associated tokens.

However, the bad news is even better—while some people go on a hating spree about projects, others start to panic sell. The price goes down, till the magical moment where wise traders “buy the dip.”

People use their publicity to alter the trading habits of crowds. For instance, wise traders were buying Bitcoin SV on the dip in May 2019. Why? There are a lot of reasons, the main one being—the early adopters of Bitcoin suspected that CSW and CZ were probably acting together and the outcome of the drama can be profitable.

The situation was somewhat similar to the one with Wright’s courier story. First, CSW played the Devil by bashing a user on Twitter and threatening to deanonymize him. Then CZ plays the Savior by making it look like he cares about CSW’s actions. Then people pick sides and it’s done.

Craig Wright is not Satoshi.

Anymore of this sh!t, we delist! https://t.co/hrnt3fDACq

The price moved down following a massive sell-off. In May 2019, Craig Wright didn’t even have to put lots of effort into one more news hook. CZ did it better, raising the price of BSV from around $60 per coin to over $200 dollars per coin from 15 to 30 May. All during the massive bashing of BSV in the news.

People like Anthony Pompliano, Eric Voorhees, Winklevoss twins, and even Blockchain.com blog writers made it clear that the community should delist BSV from main trading platforms.

We stand with @binance and CZ's sentiments. We’ve decided to delist Bitcoin SV #BSV from @ShapeShift_io within 48 hrs.

Anthony Pompliano even went as far as proposing to delist BSV from every exchange in the field.

Every exchange should delist BSV simultaneously on May 1st in a sign of solidarity behind the only Bitcoin that ever mattered.

But they do not rule the industry. Most of the exchanges kept BSV trading pairs. They were waiting for an army of traders who went away from Binance and other “delisters” to come right to them.

The only one among famous Bitcoin enthusiasts who understood that what CZ has started is a form of centralized censorship was Chinese mining king Chandler Guo. He said: ”I don’t like that CZ delists BSV. I will list BSV.”

Wise, he also supported the Ethereum Classic back in the days of its inception, as a form of opposition to Buterin’s centralized authority.

Prediction for the future

Business is a matter of money and not of ethical preference. This is true even in the crypto-industry, where ideology is as important as the tech.

It is useful to try looking at the market without emotions and taking sides. You may see a very rare picture of opportunities. Traders and companies will keep getting rich on BSV for as long as they are able to, even if they don’t believe in the coin’s ultimate success or ideas.

As for Craig Wright, he will likely keep inventing new ways of promoting his coin despite the ordeal. This is not the first time he gets caught being dishonest, and probably not the last one either. But you have to give it to him that he is very persistent.

This article is written by Jeff Fawkes, a cryptocurrency journalist and investigator. The views and opinions expressed in the article are solely those of the author and do not necessarily reflect the views of the forklog.media editorial board.