Institutional Players Ramping up Investments in Bitcoin: What’s in It for Crypto-Industry

Many crypto-enthusiasts anticipate the advent of large investors to make Bitcoin price grow rapidly and pull the whole market along with it. Galaxy Digital’s Mike Novogratz believes that Bitcoin will soon pass the $20,000 mark, chiefly driven by the regulated exchanges aimed at professional market participants.

Yet, mass adoption and the integration between the crypto-industry and traditional financial structures are slow. People have been talking about hoards of institutional investors “coming soon” for years now. Most of the conservative players in the traditional market are still concerned about the volatility of cryptocurrencies, exchange hacks, DApp vulnerabilities, and the ever-present regulatory uncertainty.

In 2018 and 2019, the mood of cautious traditional investors and their perception of the new assets started changing. The growth of CME’s Bitcoin futures popularity, the development of custodial services and OTC-platforms, multiple applications for ETFs, Bakkt launch, crypto-options, and the rise of Grayscale Bitcoin Trust are the signs of a maturing market and the growing demand from the institutional players.

In this piece, we’ve looked into the market trends and the barriers to the institutionalization of crypto, as well as the whales’ activity in particular market sectors.

“Bitcoin and Everything Else”

Despite the rapid development of altcoins and DApps, many people still primarily associate the crypto-market with Bitcoin, the first cryptocurrency both by age and market cap. Moreover, some BTC holders are still unaware of alternative cryptocurrencies or have merely heard something about it and didn’t feel like getting into details.

Scott Army, the founder and CEO of Vision Hill Group, notes that investors see the crypto-world as Bitcoin and “everything else.” The latter category includes:

There are more whales investing just in Bitcoin than those investing in “everything else” or even in somewhat diversified mostly-Bitcoin portfolios. The first crypto is perceived as the cryptocurrency market beta and a counterpart to the S&P 500.

“Bitcoin’s size and its institutionalization (futures, options, custody, and clear regulatory status as a commodity), have enabled it to be an attractive first step for allocators looking to get exposure (both long and short) to the digital asset market, suggesting that Bitcoin is perhaps positioned to be digital asset market beta, for now,” Army wrote.

Still, despite Bitcoin’s status and its substantial long-term ROI, investors still hesitate to get into the market big-time.

According to Scott Army, digital currencies and blockchain tech are extensively complicated things that most people, including the whales, find hard to comprehend.

“The reality is that institutional investors are still learning—slowly getting comfortable—and this process will continue to take time,” he noted.

Army believes that some of the interested investors are confident it’s too early to invest large sums into the crypto-market because of the numerous risks, including those related to regulation.

Large players require simplicity in investment. They want their instruments to be as close to traditional financial products as possible. They don’t want to have to dig into any sort of technical intricacies.

Speaking about the factors driving large players into the market, Kari S. Larsen, a partner at Digital Currency Group, noted:

Oliver von Landsberg-Sadie, CEO of financial services group BCB, believes that the market growth in 2019 was driven by “financial institutions who are diversifying stale portfolios and finally have the professional machinery to do so.”

The trend towards institutionalization was also acknowledged by Boris Bohrer-Bilowitzki, the head of sales at digital assets custody and portfolio management firm Copper Technologies

“Yes, without a doubt, from very public entrances like U.S. pensions and university endowments to European pension funds, family offices from all over the world, and sophisticated fund structures and strategies. There is also an increasing number of U.S. high-frequency trading getting into this space,” Boris told Bitcoin Magazine.

In his opinion, up until recently, one of the main barriers to institutional adoption was the lackluster development of professional custodial solutions.

Institutionalization is an important step towards the global adoption of cryptocurrencies as an asset class. But for as long as startups and traditional financial institutions keep building the infrastructure and products for the professional players, regulation will remain the key challenge.

Yet, Bohrer-Bilowitzki sees the progress made over the last year:

“I think the technology is there, but what is still lacking is an understanding at a regulatory/industry level about what custody means for digital assets. The regulatory landscape still needs to improve. The lack of agreement among national/regional bodies is still discouraging to some. But this too is changing rapidly for the better.”

According to Crunchbase, the volume of venture investments in blockchain and crypto-companies calculated for Q1–Q3 2019 exceeded $2 billion. 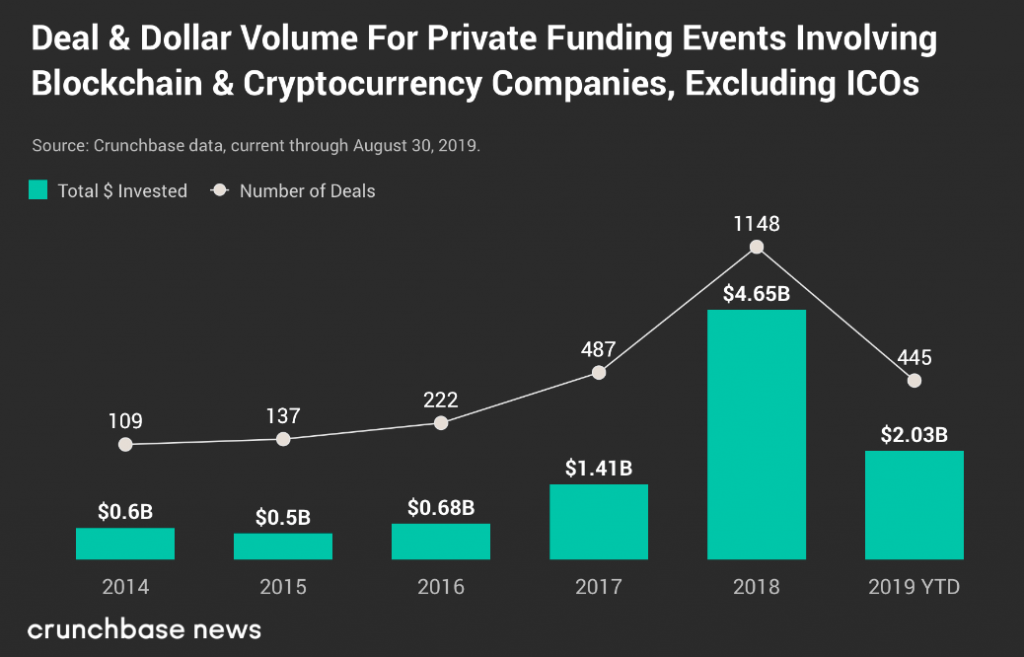 The biggest deals were:

In March 2019, Pantera Capital raised $160 million for a Venture Fund III investment project. In April 2019, the launch of a $50-million fund Proof of Capital was announced. HTC was the primary investor. Similarly, Blockchain Capital is going to raise $250 million for its fifth investment fund.

According to The Block, a security-token issuer Securitize raised $15 million from Sony and other famous companies. A custodial service Anchorage raised $40 million over a Series B round involving Visa. Blockchain Capital is invested in both companies.

Over 40 banks in Germany are interested in getting permission to operate a crypto-custody business.

One of the first banks to do so was SolarisBank AG based in Berlin. The institution has previously registered a subsidiary called Solaris Digital Assets to provide said services.

“Digital assets will fundamentally change the financial market. As soon as it becomes easier to buy and store Bitcoin and other cryptocurrencies, we expect strong growth,” said Michael Offermann, head of crypto banking at SolarisBank.

The bulk of Morgan Creek Digital’s assets is allocated for blockchain-related infrastructure companies, while about 15% goes into crypto-assets. According to Andy Spellar, the chief investment officer of the employee’s fund, venture investments are getting much more attractive on the backdrop of low interest and ROI from traditional deposits.

“It does so far exhibit some uncorrelated behavior relative to other asset classes,” he added.

Therefore, even conservative institutional players like banks and pension funds are interested in new opportunities to diversify their investment portfolios. The most progressive financial institutions are aiming not only to lower the correlation of investments with the traditional markets but to increase the profitability as well. According to Binance Research, investment portfolios that include Bitcoin can reach these goals with acceptable risks.

As of February 19th, the total volume of assets under Grayscale’s management was $3.3 billion.

02/19/20 UPDATE: Net Assets Under Management, Holdings per Share, and Market Price per Share for our Investment Products.

The company’s largest fund Grayscale Bitcoin Trust amounted to $2.95 billion. Considering the price of Bitcoin at that point, it should’ve been managing over 300 000 BTC (1.64% of the entire market supply). The company got to these numbers in less than four years of operation.

A Bitcoin-based fund is the most popular product by Grayscale with 89.29% of all assets under management (AUM). Since only the accredited investors can purchase the funds’ stock directly, this is another point in favor of whales choosing Bitcoin.

According to the recent report, Grayscale’s client base is:

The Block researchers point out that the holders of about 1.65% of GBTC (Grayscale Bitcoin Trust Common Stock) are institutional investors with AUM over $100 million. 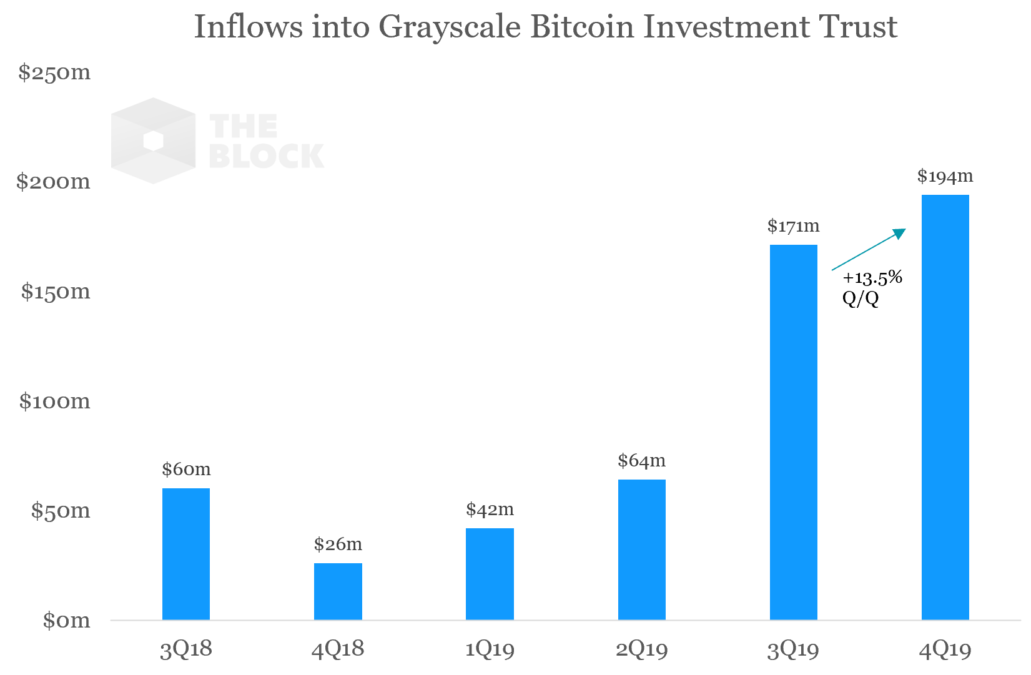 Grayscale Bitcoin Trust is one of the few Bitcoin investment options when it comes to 401(k) and IRA. GBTC shares are also popular in the U.S. OTC market.

Additionally, GBTC is priced higher than the underlying asset. 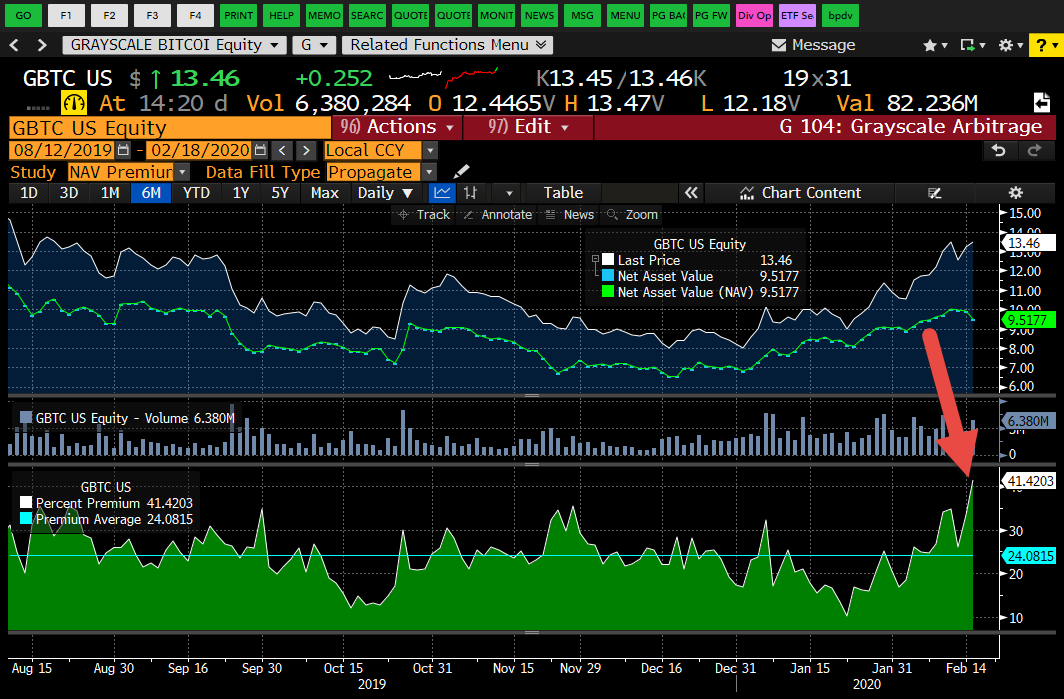 By the middle of February, the prevalence of GBTC’s premium to NAV was at 41% (6% increase compared to January. Source: Bloomberg

Investors are paying more for GBTC stock than they could’ve paid when buying Bitcoin directly. Therefore, large players are much more sympathetic to traditional assets. It suggests that the integration between the traditional market and the crypto-industry will facilitate greater demand for Bitcoin, which serves as the underlying asset for securities.

Bakkt is gaining momentum. The open interest of the platform reached its peak of $12 million in January 2020. The average trading volume for the month reached $26.45 million, gaining 22% since December 2019. 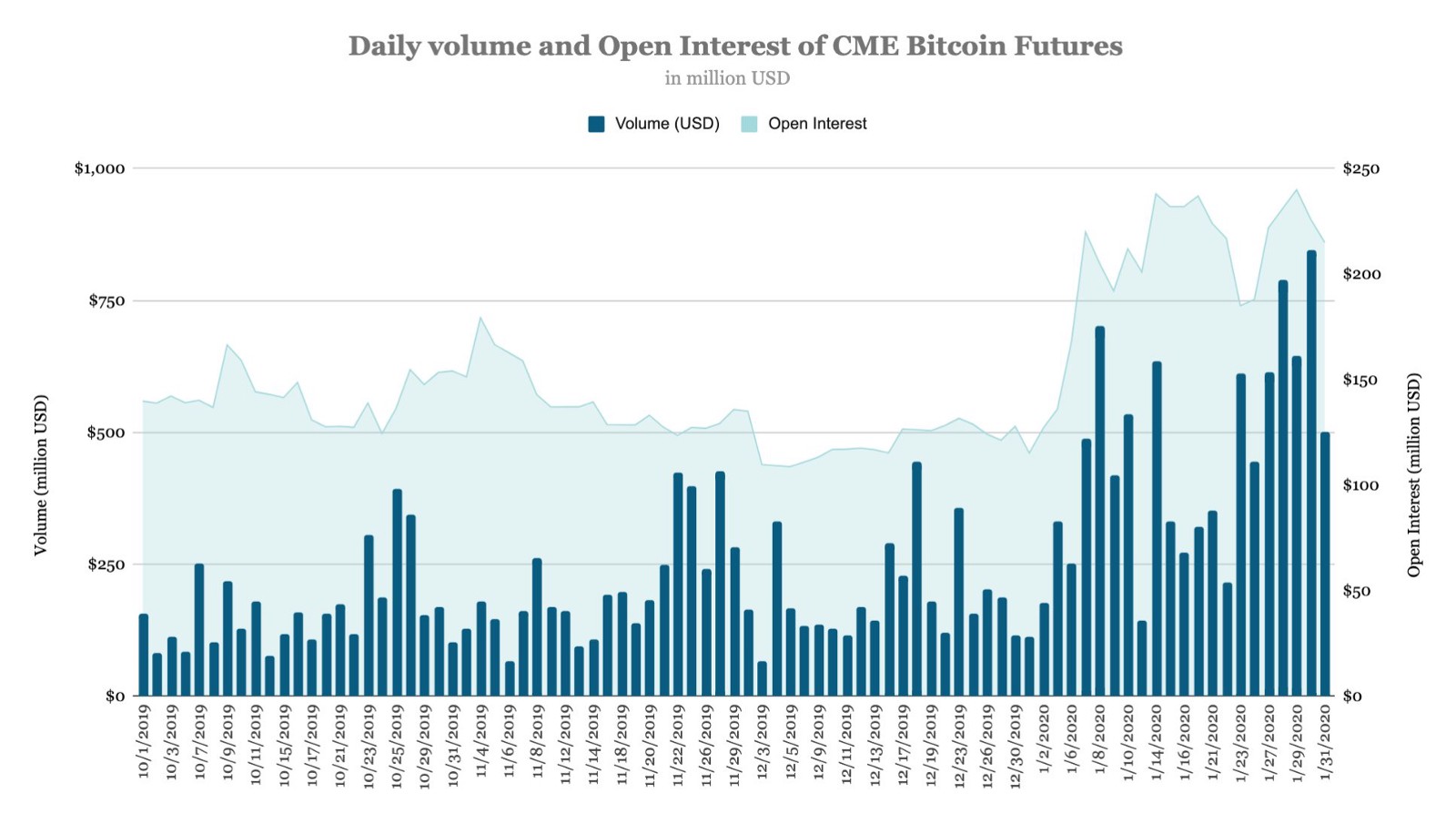 Yet, Baakt is still dwarfed by the CME, whose trading volume is 17 times as high. CME’s average daily volume increased by 144% (from $187.71 million in December to $458 million in January).

January was the second-most successful month since the launch of Bitcoin futures on CME.

In 2019, Bitcoin futures trading volume on CME increased by 69% compared to the previous year.

According to Arcane Research, the futures prices are significantly higher than the spot price.

Contango and the growing demand for the regulated Bitcoin futures may signify more improving market sentiment and large investors’ confidence in the first cryptocurrency’s future.

In 2019, a subsidiary of Fidelity Investments, a financial services corporation managing $7 trillion, got permission “to provide a virtual currency custody and execution platform, on which institutional investors and individuals can securely store, purchase, sell, and transfer Bitcoin.”

Fidelity is also planning to provide custody for a Bitcoin derivatives yield fund and intends to support Ethereum in 2020.

Recently, Fidelity invested $14 million in BC Group, the operator of a crypto-exchange OSL.

“The placement is further evidence that major institutional investors are entering the digital asset space. It reinforces what we believe at BC Group and OSL; mainstream adoption is inevitable and leading financial firms are making investments in companies that are committed to institutional-quality infrastructure, compliance, and regulatory standards,” said Steve Zhang, CFO of BC Group.

OSL is a crypto-exchange aimed at large players. It provides SAAS, as well as broker and custodial services.

Many financial companies that are interested in cryptocurrencies are creating and investing in platforms aimed at their kin. Custody is often the prioritized element.

Indeed, the greatest attention is given to Bitcoin, while popular altcoins like Ethereum are only being researched by institutional players.

Vision Hill analysts anticipate the year 2020 to be one of the brightest years in the history of crypto. Still, they stress that the forecast has nothing to do with the market prices of assets.

“If we exclusively measured the health of the industry from a fundamental progress perspective, by various accounts and measures we should have been in a raging bull market for the last two years, and that has not been the case. Rather, we expect 2020 to be a year of accelerated industry maturation,” the analysts noted.

Large players’ investments in the crypto-industry are growing, but they are still just a fraction of a huge investment portfolio. Cryptocurrencies remain the new asset class, in which many players see unacceptable risks.

Yet, the industry keeps on growing and developing, the uncertainty dissipates, and the perspectives are getting clearer.

According to Fidelity’s survey, 47% of the institutional players among the respondents have an “overwhelmingly favorable” opinion about cryptocurrencies. The survey also concluded that “institutional investors are finding appeal in digital assets and many are looking to invest more in digital assets over the next five years.”

He also mentioned that Bitcoin will remain the currency of choice for the institutional players.

Therefore, if the whales continue to associate the entire cryptocurrency market with just Bitcoin, its market share will keep growing. Given the limited supply, the halving-induced inflation decline, and the same or greater demand, the price will go up. This is the demand law that doesn’t depend on the people’s sentiment.