How Miners Brace Themselves For Halving, and How It Can Impact Bitcoin

Halving is probably the most anticipated event of 2020 in the crypto-industry. It is a scheduled decrease in block reward from 12.5 to 6.25 BTC. Since the transaction fees comprise a small fraction of miners’ income, they will basically have half of the money cut out.

In this article we look at how the mining industry is preparing for the halving event and what does it change for miners.

For the last year, the hash rate of Bitcoin has been growing almost uninterrupted. As a result, mining difficulty has grown as well. This happened partly because more devices got hooked up for mining and partly because of the shift to new better devices.

Back in 2019, JPMorgan Chase experts noted that Bitcoin is worth less than the costs to mine. At that time, miners had to spend $4060 to get 1 Bitcoin worth around $3600. This level was surpassed in April and isn’t anywhere close since then.

Coin Share analysts set a higher break-even point at $5700. They’ve included the standard cost of electricity ($0.05 per kWh), equipment amortization for 18 months, and the operational expenses of 15% of the total costs.

What does that mean for profitability? I'll let you do the math… ??

It turned out that since May 2019, Bitcoin hasn’t gone as low. Mining was sufficiently profitable to drive the advent of new more powerful devices into the market in preparation for halving.

According to the data by Kaboomracks, a mining equipment broker, back in August the previous price for S9 was $450. Then it plunged along with the mining revenue. Yet, when the revenue trend flattened, S9 price went further down to $90–60. 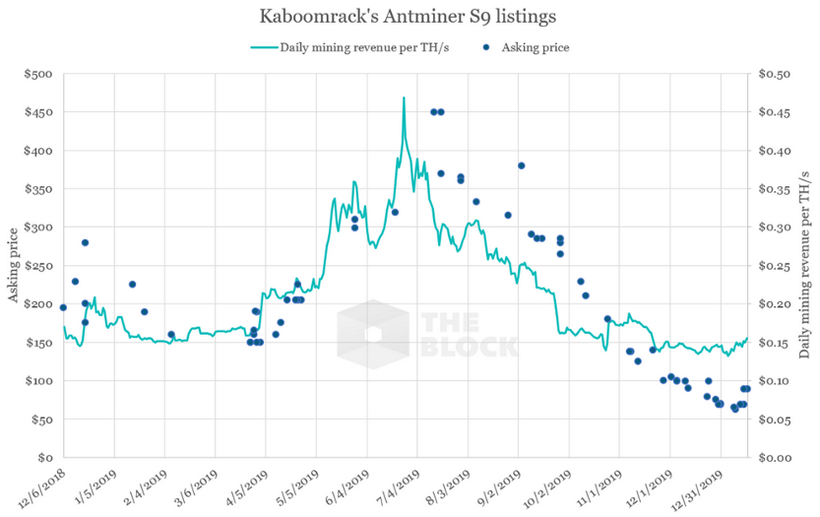 According to Chinese media, local miners were getting rid of their S9’s. A Sichuan-based used mining equipment trader said that he sold 30 thousand devices between August and November 2019. In November, the price for Antminer S9j 14.5m dropped to $113 and then to $98.

A Sichuan-based mining farm executive told media that at the end of November Bitmain dumped 10 thousand S9j 14.5m devices into the secondary market for $100 each. The devices came from one of Bitmain’s facilities.

Yet, mining with S9 remains profitable, although not as much as with newer flagships.

Importantly, researchers estimate the average electricity tariff for miners as $0.04 kWh, but the calculations here use $0.05. Reportedly, during the rainy season electricity prices in Sichuan reach as low as $0.015 kWh.

In September, this season ended. Miners have likely started to upgrade their equipment anticipating lower rewards that would make older devices unprofitable.

There isn’t much publicly accessible information on Chinese miners, but there is for their Western counterparts.

According to The Block estimations, the total mining revenue for 2019 amounted to $5 billion. The main expenditures are tied to electricity consumption. Currently, Bitcoin consumes 80–90 TWh per year, depending on the hash rate fluctuations. With all the losses, mining revenue appears to be sufficient to cover equipment upgrades.

Yet, according to Leo Zhang of Interactive Capital, large miners work with credit firms, including those in DeFi, to scale their business and upgrade the rigs. He also believes that the break-even point for mining is now at $6,500, grounding the estimations in the information he got from miners. This means that after halving, Bitcoin has to reach at least $13,000 for the mining companies to be financially stable.

Apparently, miners are indeed expecting Bitcoin to grow. After the previous halving event the currency went on to parabolic growth eventually reaching $20,000 at the end of 2017. This may at least partially justify miners’ expectations. Still, many experts believe that the upcoming halving will be different from the previous two.

Cryptanalyst Willy Woo noted that unlike 2012 or 2017, this time Bitcoin will get to halving on the backdrop of bearish moods.

NEVER gone into a halvening in BEARISH price action, miners already capitulating adding sell volume. Historically we front run with a BULLISH setup, miner capitulating only after halvening when revenues are slashed. This is a unique setup. Quite bearish leading up to the event. pic.twitter.com/20748Zv8aQ

CoinShares’ Chief Strategist Officer Meltem Demirors believes that Bitcoin won’t be able to grow after halving because of the well-developed derivatives market, which wasn’t there in previous cases.

1/ there is a very real possibility the price of bitcoin does not go up after halving.

for the first time, there is a robust derivatives (futures, options) market for bitcoin. most firms looking to speculate on bitcoin will trade a derivative, not the underlying.

CoinMetrics analysts suggest that Bitcoin price may follow the same scenario as Litecoin: growth expectations and then drop.

Was the most recent LTC halving priced in before it even occurred?

In this week’s issue of State of the Network @luyongxu explores both sides of the debate about whether halvings are priced in beforehand.

In a few months, we will be able to evaluate the mining industry’s financials after the reward halving. The total hash rate and public companies’ reports will allow for a representative picture. Yet, consolidation of power by the large players and the growing share of Chinese miners are to be expected.