As the virus spreads across countries, the world’s economies feel the negative impact. In December 2019, when the COVID-19 outbreak took on, two-thirds of the total Bitcoin mining capacity was localized in China, the patient zero country. The virus harmed many sectors of China’s industry, disrupted logistics, and made export and import operations significantly more complicated.

Many businesses are on the brink of bankruptcy because of insufficient cash flow, low reserves, and complications with loans and debt restructuring. Some companies, including miners, may not survive the crisis.

We’ve gathered the data and expert opinions to figure out how the COVID-19 epidemic impacts traditional markets and the crypto-industry.

Back in January, experts were suggesting that the new virus can harm the Chinese economy similarly to the bird flu of 2003 when the epidemic hit the most developed regions of China. These regions together contributed about 15% of the country’s GDP.

Since then, China’s role in the world’s economy has become more significant. With GDP of $1.66 trillion in 2013 and $14 trillion in 2018, now the country is responsible for almost a quarter of the world’s total GDP. Moreover, the virus is quickly spreading to other developed countries, causing turbulence in the financial markets. 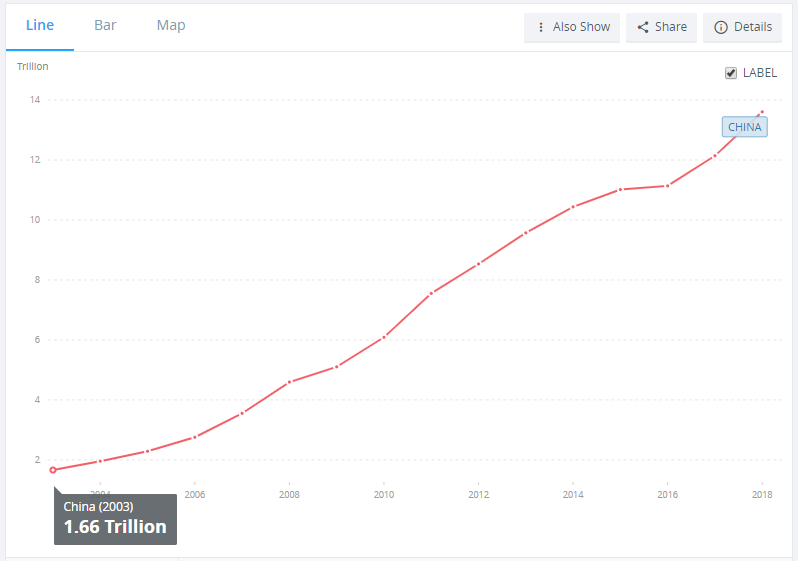 Over the last week, the world’s market lost $5 trillion in capitalization. According to Financial Times, this is the worst trading week since the recession of 2008. 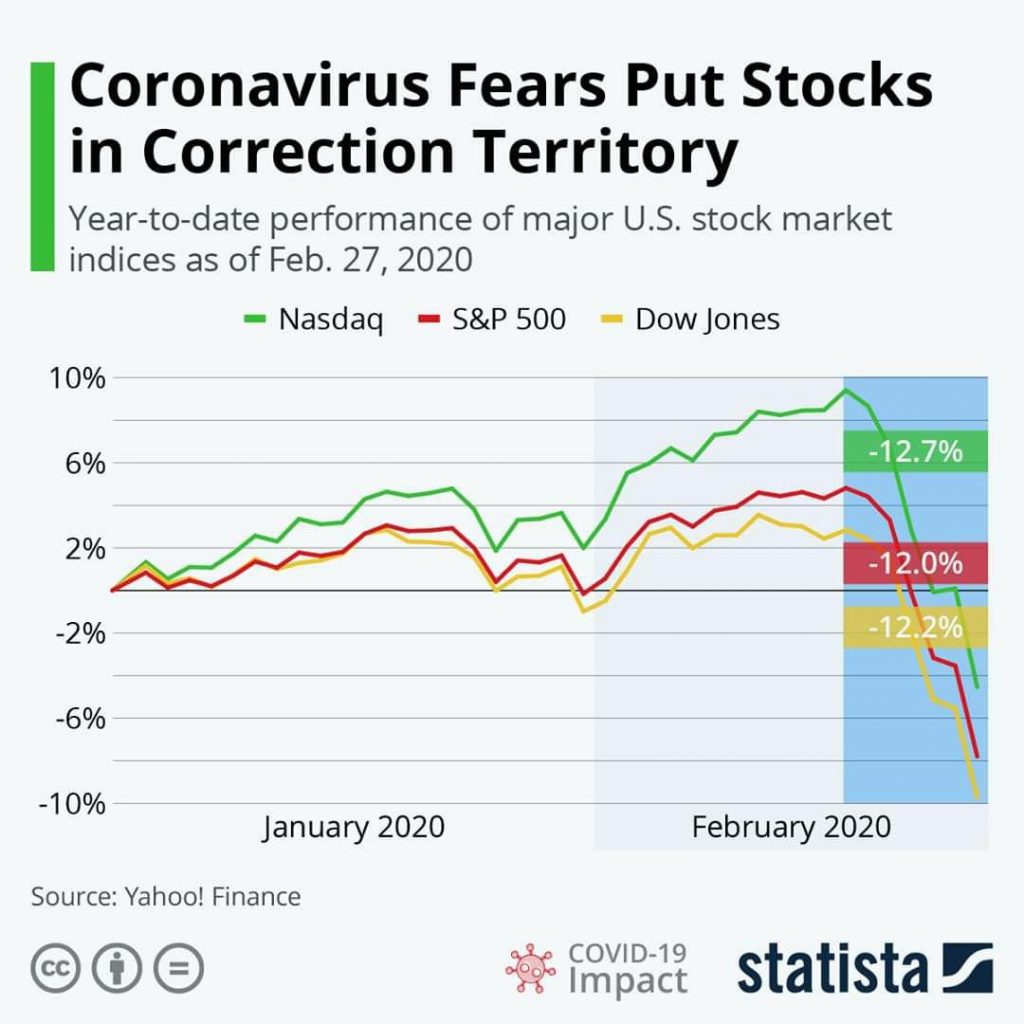 According to Bloomberg, China’s car sales went 92% down over the first half of February. 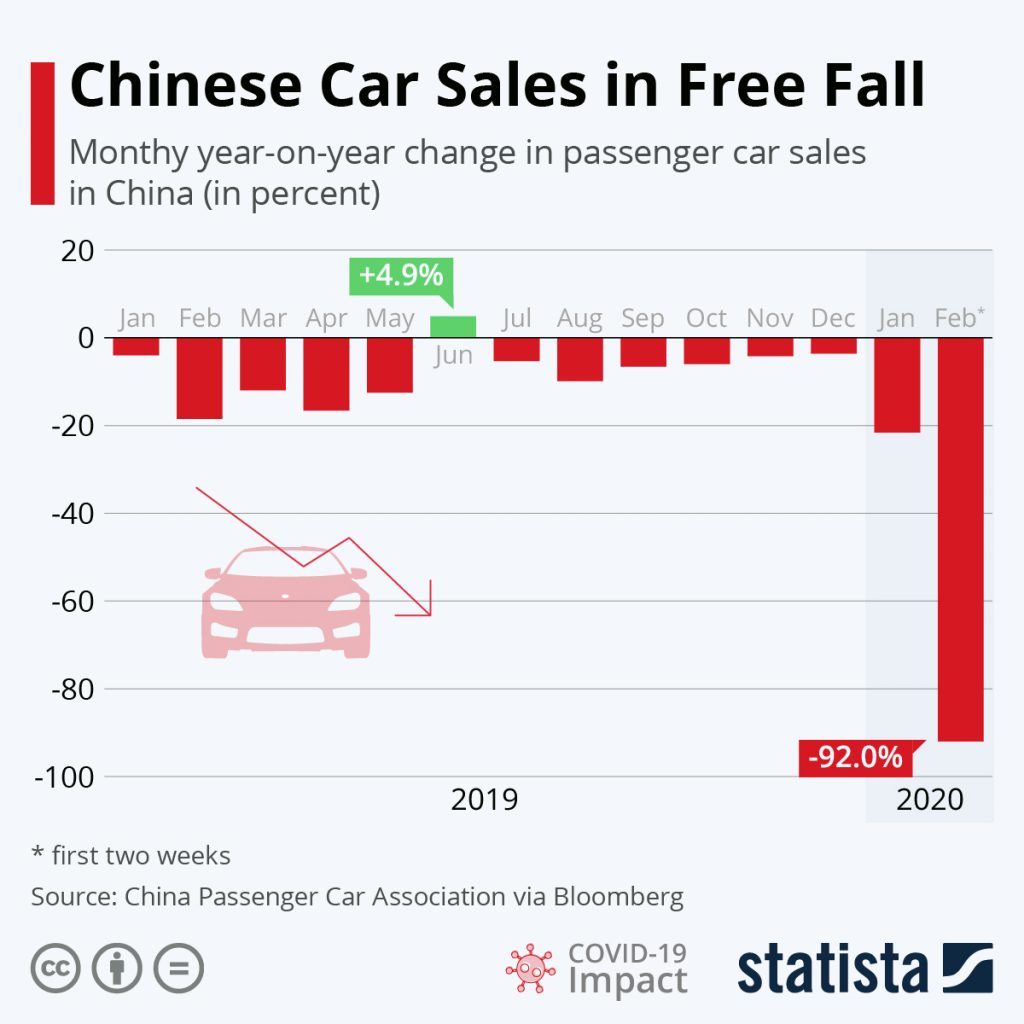 About 60% of cars sold in China are imported. The most desired were the cars manufactured by Germany and Japan. A large dealership company Brigita has 100 of its shops closed for over a month now. The company’s reserves are dwindling and banks are unwilling to extend debt repayment periods.

On the backdrop of pessimistic expectations, panic, and the global decrease in business activity crude oil and other commodities are plunging as well. 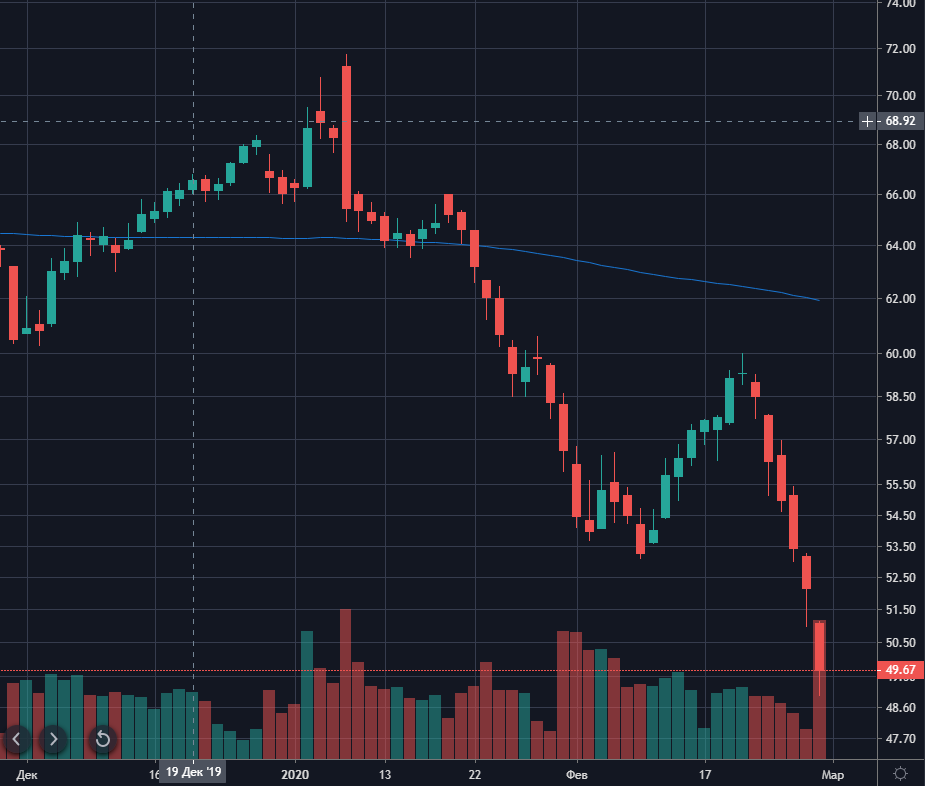 Goldman Sachs experts believe that if the epidemic keeps spreading, the market price of gold will get to $1850 in Q2 2020.

“[COVID-19’s] highly contagious nature will cause more cities to quarantine and will continue limiting people’s ability to work. While the equity markets have been red hot to start the year, I am convinced that COVID-19 will continue to cause negative shocks for months to come. Companies will start missing their forecasts and the rest will snowball,”  wrote The Block’s analyst Larry Chermak.

Despite the Chinese authorities’ measures to try and stabilize the country’s economy, on February 3d the country’s exchanges witnessed the most radical downturn for the last 13 years. CSI 300 index lost over 9% and Shanghai Composite lost over 8% showing the worst results since 2015. According to Bloomberg, a third of all Chinese companies have only a month-worth of resources to keep the operations running. By the end of 2019, China’s GDP growth rate amounted to 6.1%, which is the worst result for the last three decades:

Nouriel Roubini thinks that after the epidemic the world’s economy won’t get back on its feet quickly. He stresses that it is a global pandemic that’s not confined to China. In his opinion, the fiscal and monetary incentives suggested by governments and central banks won’t be sufficient to revive the business activities.

Bank of America’s analysts expect the global GDP growth to slow down to 2.8%, which would be lower than the 3% result of 2009.

Epidemic Impact on Cryptocurrencies and Mining

“The country’s internal logistics is almost completely paralized. Strategic cargoes needed to fight the virus and food are prioritized. Given that people can’t go to work and the police enforces this rule, delivery and installation of new ASIC’s is virtually impossible,” said Zodd Zverev.

He added that the economic uncertainty and the measures taken by the Chinese government increase the demand for crypto in the country. In his opinion, the decrease in China’s electricity consumption may lead to a shutdown of several hydroelectric power stations, causing mining farms to stop and therefore the leading to a drop in the total hashrate.

Although, the expert also sees certain positives in the given situation.

“Obviously, the Bitcoin price is unlikely to double in anticipation of the halving, so any delay in deployment of new equipment will help the sector remain profitable. Even an event as dramatic and horrible as the coronavirus epidemic can bring some benefits along with it.”

BitCluster co-founder Sergey Arestov is confident that the mining business located outside of China will gain profitability after the expected mining difficulty drop. This will have a positive effect on Bitcoin network decentralization.

Canaan forecasts that ASIC miners may soon get more expensive, as the disrupted production and delayed deliveries will cause a market deficit.

In early February, the founder of BTC.TOP mining pool Jiang Zhuoer reported that a large mining farm in China is at risk of being closed by the authorities. He argued that it isn’t clear how stopping mining equipment will help prevent the spread of the epidemic.

“Yes, there are measures taken to prevent further spread of the virus, but for the most part everything works at full or at almost full capacity,” he said.

The chart below shows that there were no significant downturns in hashrate, although it’s growth became somewhat slower.

De La Torre hopes that the COVID-19 situation should normalize in 1–2 months, but there may be a short-term decrease in hashrate. He said that the industry needs mining companies outside of China and the virus creates the conditions for the development of such companies.

A former Bitmain manager, who wished to remain anonymous, said that the virus hindered deliveries of new equipment. This may lead to a drop in Chinese mining farms’ productivity. The companies without sufficient cash flow will be the first to suffer.

“If the supply of mining equipment turns out to be insufficient, the farms won’t be able to work as usual and will have to close because of the lack of funds. This will be a serious blow to the industry players,” he noted.

MicroBT representatives stated that up to 80% of the company’s employees are currently working from home, but the business is up and running. Earlier the company had to extend the Chinese New Year holidays.

We hereby announce that the Chinese New Year holiday will be extended to Feb. 9th during the Corona Virus outbreak in China. For more details, please click here https://t.co/qlk0fsxTkX pic.twitter.com/PnieXmOypm

MicroBT also noted that the top executives of the company didn’t leave China and there were no COVID-19 cases among the employees. MicroBT has offices in Shenzhen, Beijing, and Shanghai. The company representatives couldn’t say for sure when the situation will get back to normal.

Many companies across the globe have already come up with plans in case the epidemic gets worse. The most pessimistic scenario expected by Coinbase implies that all employees will work remotely.

As for the Bitcoin price, there are all sorts of suggestions. Some people say that banknote quarantine and other measures taken by China’s central bank give a positive signal for Bitcoin, which has no physical form.

“Bitcoin is not commonly used in China and therefore cannot be a viable replacement for cash. Especially when Wechat and AliPay are already widely accepted in the country.”

Still, the shift towards digital currencies could’ve inhibited the spread of the virus. China’s central bank seems to agree with this idea and may ramp up the efforts to develop digital yuan.

On the other hand, there are reports about increased demand for Bitcoin in Iran. The surge may be caused by the shortened work hours of the country’s banks.

Fundstrat Global Advisors co-founder Tom Lee believes that Bitcoin will grow on the backdrop of the global instability and COVID-19 epidemic. In his opinion, the upcoming halving event will increase the demand for the first crypto even more.

COVID-19 is quickly spreading across the world shaking the markets far and wide. The epidemic can simply hinder the growth of the world’s economy, but it can also trigger the new global recession.

Investors sell even the best-performing stocks to put money into protective assets like gold and U.S. government bonds, while also ramping up fiat positions.

There is no definite answer as to whether Bitcoin acts as a protective asset during the times of global crises. Yet, BTC has no strong correlation with the stock market and thus can be used to diversify investment portfolios.

Arguably, the Bitcoin price can lay stagnant until the epidemic ends. The market at large will still feel the pressure because of the strong correlation with the first crypto.

If the situation in China gets worse, some mining farms are likely to be closed. This may lead to a decrease in hashrate in short and medium timeframes. Still, these complications for Chinese miners may make mining in other countries more profitable, which is good for overall network decentralization.

The suggested drop in mining complexity will bring the breakeven point for miners lower, making it more profitable for small players from countries with less appealing electricity prices. Moreover, it will mitigate some of the halving-related risks.