Global Recession: What Are Risks For Bitcoin And Miners

The last few weeks have been hard for the world economy and logistics. Logistics and supply chains are disrupted, some states close their borders and restrict public events. This doesn’t make investors happy, lowering business activity and total demand.

In this piece, we figure out if the global crisis is already here or is yet to come and explain its effects on cryptocurrencies and miners.

Amidst the growing uncertainty and fears of further spread of the coronavirus, the Federal Reserve suddenly cut interest rates by 1% down to the 0–0.25% range. To prevent recession and reanimate business activities the central bank decided to buy $700 billion in government and mortgage-related bonds

This resembles the 2018 crisis. Back then the U.S. financial crisis has grown into a global recession similar to the Great Depression of the 1930s in its scale and ramifications. In November 2008, the Fed resorted to QE for the first time, buying $600 billion worth of obligations. While the indices kept on falling until March 2009, QE did help to slow down the fall.

On March 15th, the Fed announced a discount window allowing financial institutions to borrow money for up to 90 days. Reserve requirements were announced to be reduced to zero. It seems that these measures were meant to support troubled businesses with accessible loans and prevent mass layoffs and bankruptcies.

These are virtually the most radical measures to be taken by the central bank in one day. The Fed is ready to use all its monetary tools if the recession risks grow.

The Fed chairman Jerome Powell expressed concerns about the potentially weak business activity in Q2. He also noted that the government may use stimulating fiscal measures.

“The thing that fiscal policy, and really only fiscal policy can do, is reach out directly to affected industries, affected workers,” Powell said.

Powell stressed that the introduction of negative interest rates, similar to those in the EU and Japan, is unlikely. Given this statement and the current rates, the last resort for the U.S. authorities is the increase of QE (likely up to $1 trillion) and substantial fiscal incentives.

Now, the Fed is getting ready to give money to primary dealers (the U.S. top banks) so they can purchase cheapened corporate bonds, which represent companies’ debts. The authorities are seriously concerned about the potential wave of bankruptcies.

Even such extraordinary monetary incentives weren’t enough. In fact, they just made investors more alarmed. 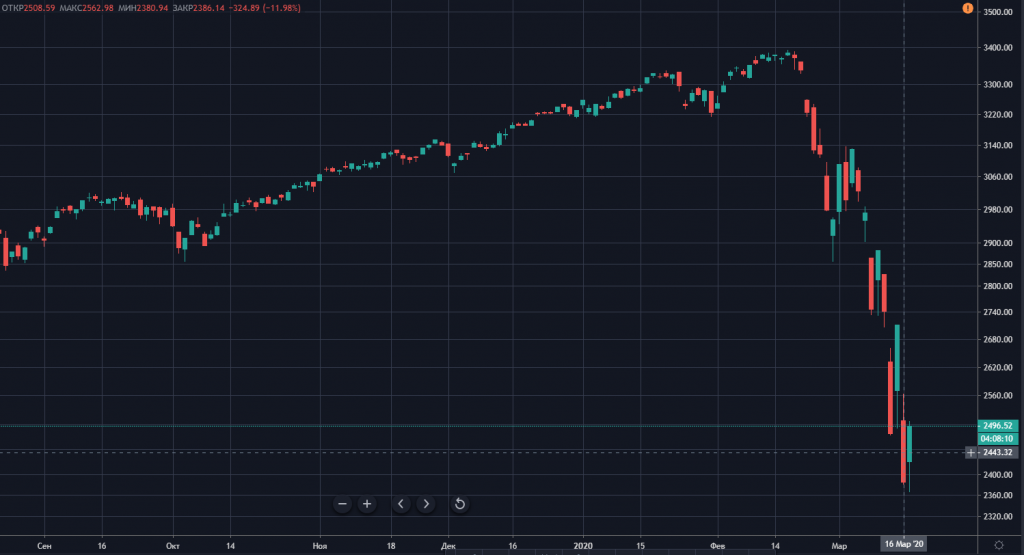 Fiat Chrysler suspended most of its European production facilities until March 27th. The company’s stock lost 10%.

British Airways (BA) will cut 75% of flight capacity trying to cope with the coronavirus outbreak. The company’s stock price decreased by 26%.

Eurozone finance ministers are considering the possibility of using the European Stability Mechanism (ESM), which played a major role in the 2010–2012 debt crisis. Currently, the ESM has a lending capacity of €410 billion.

Brent crude oil went below $30 for the first time since January 2016.

Given all the emergency measures, the lack of a positive response from the markets signifies that the plunge of indices, commodities, and stocks isn’t over. In addition, S&P 500 is falling faster than it did in 2000 and 2008. 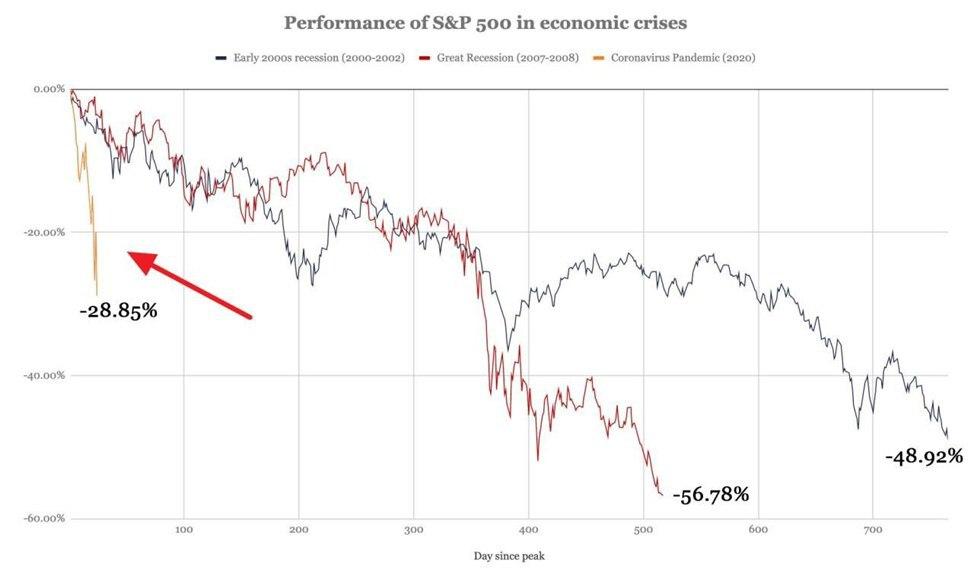 In the UK, recession is defined as two or more consecutive quarters of negative economic growth. The U.S. National Bureau of Economic Research defines recessions as “a significant decline in economic activity spread across the economy, lasting more than a few months.” There is also the term “depression,” which essentially means a long and severe recession.

Experts at the U.S. largest independent broker-dealer LPL Financial are confident that the longest bull market in the history of traditional finance is over. The analysts also note that the beginning of a bear market doesn’t necessarily entail recession. 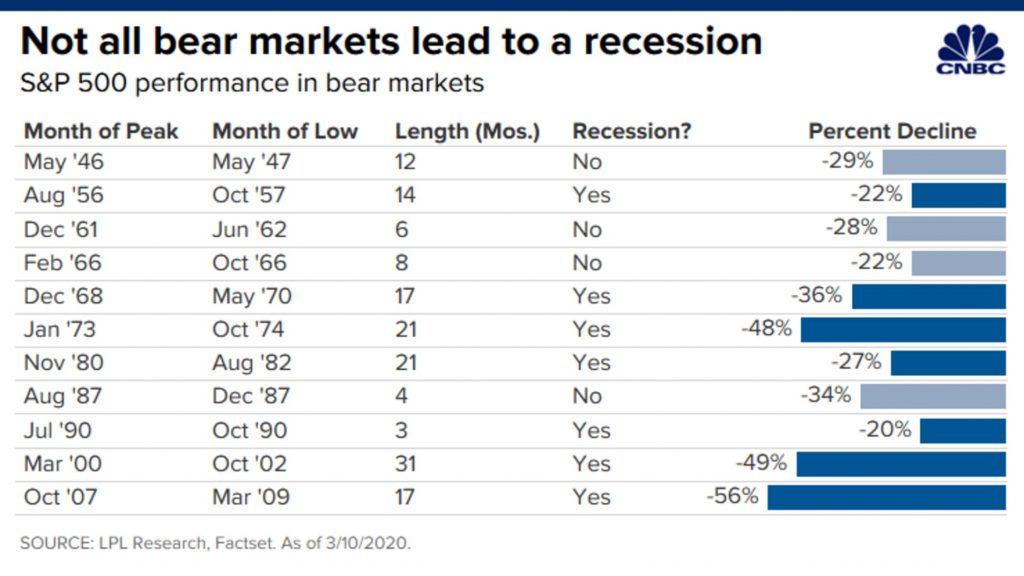 Some economists are confident that the economic downturn will last only a few months and the U.S. will be able to avoid a technical recession. JPMorgan experts expect business activities to get back up by mid-2020, when coronavirus spread slows down.

Goldman Sachs experts believe that S&P 500 will bottom out at 2,000 if the coronavirus continues to spread. According to the firm’s equity strategist David Kostin, the epidemic will make a lot of companies lost revenues and influence the economy as a whole. Although, the analyst also expects the market to take a V-turn and S&P 500 to get back to 3,200.

An international consulting firm McKinsey & Company suggested three potential scenarios regarding the consequences of the coronavirus outbreak. The most pessimistic involves a global recession. The levels of consumption and savings will get back to normal only after Q3 2020.

There’s a common opinion that Bitcoin exists all by itself and doesn’t correlate with traditional assets. The proponents of this hypothesis claim that it makes Bitcoin a perfect asset for portfolio diversification.

A technical analyst under the nickname Crypto Michaël noted that people are selling equities, Bitcoin, and silver to grow fiat positions.

Doesn't seem unreasonable that people are selling their assets (equities, $BTC and even silver) to just increase their cash positions out of economic instabilities due to the coronavirus.

According to Arcane Research, during the latest crash, the correlation between Bitcoin and S&P 500 reached its maximum.

The 90-day correlation between Bitcoin and S&P 500. Source: Arcane Research

Correlation between cryptocurrencies and traditional instruments. Source: The Block

Now, the situation changed entirely. Bitcoin falls as fast as the stock market while the correlation with gold is mush weaker.

Still, not all experts are happy with the recent interest rate adjustment by the Fed. While Morgan Creek Digital co-founder Antony Pompiliano interpreted it as a bullish sign for Bitcoin, The Block’s analyst Larry Chermak noted the close correlation between Bitcoin and S&P 500, which kept on falling.

Such a significant drop in Bitcoin price creates uncertainty and this effect is amplified by the upcoming halving, which will make mining less profitable.

Given the electricity costs of $0.06 per kWh, only the newest mining devices are profitable. Formerly popular Antminer S9s are working at a loss. 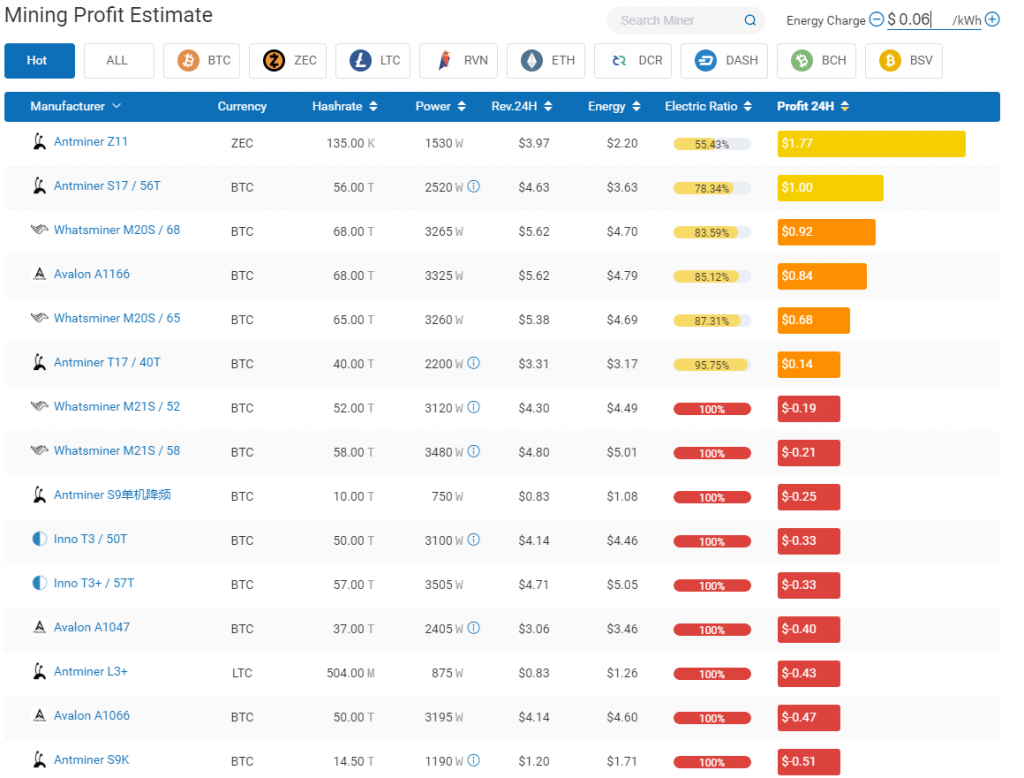 If by May 12th the price doesn’t show substantial growth and mining difficulty remains at around current levels, many industry players will go out of business. Until then, the market will also feel pressure from some miners who will try to sell their holdings to cover the costs.

Considering the ineffectiveness of the monetary incentives and the dynamics of the epidemic, global recession seems inevitable. It is possible that COVID-19 triggered the cascade of financial crises that were brewing for a long time.

Given the strong correlation between Bitcoin and world indices and the fact that the first crypto wasn’t adopted as a safe-haven asset during the crisis, the cryptocurrency market will likely be stagnating until the global uncertainty and the epidemic go away.

The low price of Bitcoin makes mining unprofitable for many players. Those with other than top-notch rigs and all but very cheap electricity will not make it. As a result, Bitcoin hashrate and mining difficulty will go down. The breakeven point for mining and Bitcoin price will keep looking for equilibrium.

This is an adaptation of the original Russian-language article written by Alexander Kondratiuk.