In the crypto community and the society at large, there has been a long-running debate pertaining to whether Bitcoin can be defined as a protective asset along with gold, Japanese yen, Swiss franc, and U.S. government bonds.

Some experts insist that the unique properties of the first cryptocurrency make it a safe haven for periods of geopolitical turmoil when turbulence on world markets is at its highest. Skeptics believe this assumption to be far-fetched and kindly remind the public of the instances when Bitcoin went up and down along with the S&P 500 or did not react at all to the volatility of indices or the price of gold.

So, has digital gold truly matured to a protective asset status?

The early days of 2020 were marked by a sharp aggravation of U.S.-Iran relations, which had a significant impact on financial markets.

On January 3, against the backdrop of the attack on an Iraqi military base and the assassination of Iran’s general Qasem Soleimani, traditional protective assets, gold, and the Japanese yen, rose in price. Bitcoin rallied immediately by almost $500 (more than 5%), returning to levels above $7,000.

On January 8 Iran launched several missiles at a U.S. military base in Iraq. The markets reacted immediately: oil and gold shot up and Bitcoin rose above the $8,400 mark. A single week of geopolitical turmoil saw Bitcoin growing by almost 20%.

Soon Donald Trump addressed the American nation stressing that “the United States is ready to embrace peace with all who seek it.” He also emphasized that America is no longer dependant on Middle-Eastern oil and that the strike on targets in Iraq yielded no human casualties.

Bitcoin reacting to specific events within the conflict

Amid ebbing geopolitical tensions oil and gold dropped in price. And so did Bitcoin, once again manifesting itself as a protective asset.

Joshua Green, head of trading at Digital Asset Capital Management, voiced an opinion that the recent Bitcoin rally was definitely a response to the Iraqi crisis.

“You are also seeing oil and gold up strongly,” he noted.

Ran Neu-Ner, the host of CNBC’s Crypto Trader, spoke out in solidarity with Green.

Whereas I would have preferred the BTC price to continue climbing , watching Bitcoin and Gold move down together on Trumps speech cemented the fact that investors are truly moving into Bitcoin as a safe haven from political events. No investor can deny this any longer.

Bitcoin's price dropped back down to $8100 (from $8300-8400 range) right as Trump announced at 11am ET that the US will not escalate the conflict with Iran. Pretty cool to see bitcoin's price movement starting to have a closer relationship with global events. pic.twitter.com/pAcQEg3Z7P

CoinDesk Markets analysts conducted a survey on whether U.S.-Iran relations affected the price of Bitcoin. Most participants responded positively.

Are the geopolitical tensions between the U.S and Iran correlated to the recent rise in #bitcoin's price?$BTC

Experts from Arcane Research noted that in the light of recent developments in the markets, the first cryptocurrency really manifests itself as a safe haven.

“As the tension is rising between the USA and Iran, Bitcoin is showing signs of being “digital gold,” concludes the company’s report.

CoinMetrics experts are for one not as unequivocal in their assessments. According to their observations, on January 3 oil and gold futures reacted to the U.S. attack and the assassination of Soleimani instantly. But Bitcoin’s rally started only a few hours after the reaction of the world of traditional finance.

Experts theorize that one of the possible explanations for this delay is the low efficiency of the emerging digital assets market. In other words, unlike traditional investors, crypto enthusiasts may not be following significant political events so closely and, most importantly, are not as quick to respond to them.

On the other hand, according to CoinMetrics, Bitcoin often showed sharp leaps in price even without any “catalyzing news”:

“Bitcoin has historically seen sharp intraday price changes without any apparent news catalyst. Instead, these price changes are driven by forced liquidations on futures products which can have a disproportionate impact on short-term prices and are often the cause of bouts of short-lived volatility.”

Nevertheless, CoinMetrics are confident that, against the backdrop of recent events, the “safe haven theory” in general holds water. Experts emphasize that the reaction of the BTC price to the address of the American leader was actually immediate.

“We have witnessed perhaps the strongest validation of the Bitcoin safe haven theory in its 11-year history, and this watershed moment marks an important milestone in Bitcoin’s maturation as a legitimate asset class.”

So under certain conditions, when many market participants closely monitor important news and are ready to respond to them as quickly as possible, the efficiency of the Bitcoin market can be extremely high.

Applying a pinch of technical analysis to the situation, it can be noted that since July Bitcoin’s price has been falling within the descending channel. Only at the beginning of 2020 did the formation of the “Head and Shoulders Bottom” pattern become apparent, the conclusion of which coincided with the events in the Middle East.

Under pressure with gold and other anti-risk assets losing ground on easing of geopolitical tensions.

There Is Still Room for Doubt

In most cases, Bitcoin positively responds to the turbulence of world markets. Its price often correlates with gold and other protective assets.

Yet such dynamics are perhaps not observed consistently enough to make it carved in stone. Back in August 2019 avid Bitcoin critic Peter Schiff noted that as the U.S.-China trade war was raging, Bitcoin plunged along with stock markets rather than rally with protective assets.

Since last Thursday Bitcoin has lost more value than any of the major stock market indexes, while gold and silver have gone up. You can keeping looking in the rear view mirror while ignoring what's happening right in front of you!

That being said, after Trump’s tweet on the disruption of trade negotiations and the introduction of a 10% tax on $300 billion worth of Chinese goods, Bitcoin, gold, Japanese yen, Swiss franc, and 10-year treasury notes almost simultaneously rose in price.

Bitcoin has also repeatedly responded positively to changes in the Fed’s base interest rate. On the other hand, for most of last year, BTC showed a negative correlation with the S&P 500: 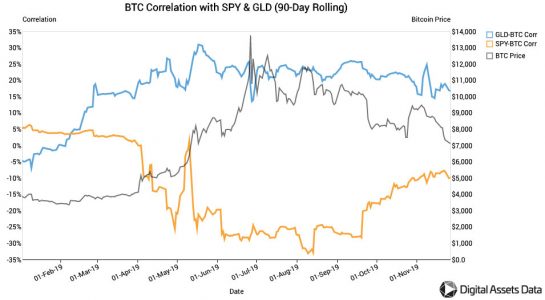 Since October 2019, the correlation between Bitcoin and gold has been floating around the -10% mark. BTC can hardly be used to hedge global risks at the time.

Conversely, Digital Assets Data co-founder Eddie Alfred believes that long-term investors should not worry about the protective properties of Bitcoin. According to him, the trend observed at the end of the year is an anomaly.

Although it is not always the case, Bitcoin does quite often correlate with protective assets in the face of significant global events. The latter include not only wars but also, for instance, protectionist measures taken by powerful world economies or even a decrease in the Fed rate.

Bitcoin’s volatility is significantly higher than that of U.S. treasury bonds, S&P 500 and even gold. Thus Bitcoin is still lacking in one of the most important properties of a protective asset. And yet, judging by the price dynamics in early January, for many investors Bitcoin is definitely a relevant asset in times of global uncertainty.

Bitcoin remains a unique asset that can well prove to be a great instrument for diversifying investments. Despite the relatively large range of BTC price fluctuations, its adoption along with other financial instruments can increase portfolio profitability at an acceptable level of risk.

The degree of correlation of Bitcoin with other crypto assets is gradually declining, as well as its volatility. At the same time, the efficiency of the Bitcoin market is growing, which is especially noticeable in the recent reaction of Bitcoin prices to ebbs and flows in geopolitical tensions.

These are all signs of the industry’s maturation, which over time becomes more attractive in the eyes of institutional investors.