Binance Accused of Stealing $1 Million Worth of Assets: Company Denies Everything but Class Action Underway

In November 2018, Binance cryptocurrency exchange blocked an account containing almost $1 million worth of funds. Its owner accuses the site employees of embezzlement. This was initially reported to Forklog by the representatives of HackControl.

The exchange allegedly demanded additional verification as part of the KYC/AML policy and an explanation concerning the origins of the funds in question. Binance reported that the account was suspended at the request of the South Korean police. The user claims that South Korean law enforcement authorities had no complaints against him.

Disclaimer: All statements in this material are based on information received from ForkLog and Binance sources and are not editorial opinions. The editorial office is open to any information from third parties mentioned in the material or otherwise.

How Much Was Locked?

According to the user, the exchange blocked $858,999 worth of assets. He provided ForkLog with a Bitcoin address to which he made deposits.

What Was Binance’s Reaction?

According to the owner, he fully explained the origins of the funds, although we do not possess detailed information. Binance consequently informed him of a suspension on a request from the South Korean police.

Representatives of the exchange in a conversation with ForkLog said that the user received a significant portion of the 3,995 ETH stolen from the unnamed Korean project. The theft took place on November 8, 2018. On January 18, 2019, Korean law enforcement officers asked Binance to return funds to the affected startup, which the exchange did.

In April 2019, Ukrainian law enforcement officers turned to Binance on behalf of the user. The exchange also notified them of the request from South Korea.

What Is the Position of the South Korean Police?

The account owner tried to find out if there was indeed a ruling by a South Korean or international court and what were the legal grounds for the suspension.

According to him, lawyers did not find any reason to block or write off funds. The South Korean police allegedly denied that they made any claims about the user. 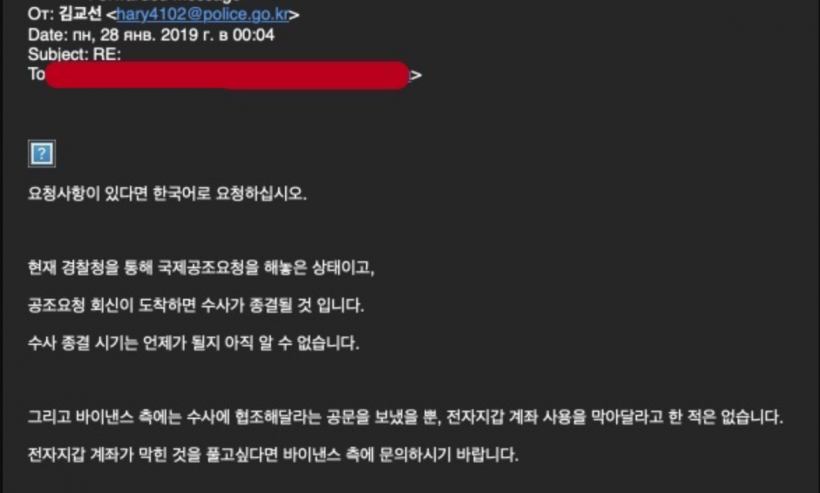 The police also emphasized that they did not ask to block or transfer funds, the user claims. Communication was carried out through an interpreter, but the authenticity of the correspondence could not be established, and our source did not forward the original letter.

The account owner notified Binance of the South Korean police statement, but the exchange is still not acting upon his numerous requests (see numbers of relevant tickets here). 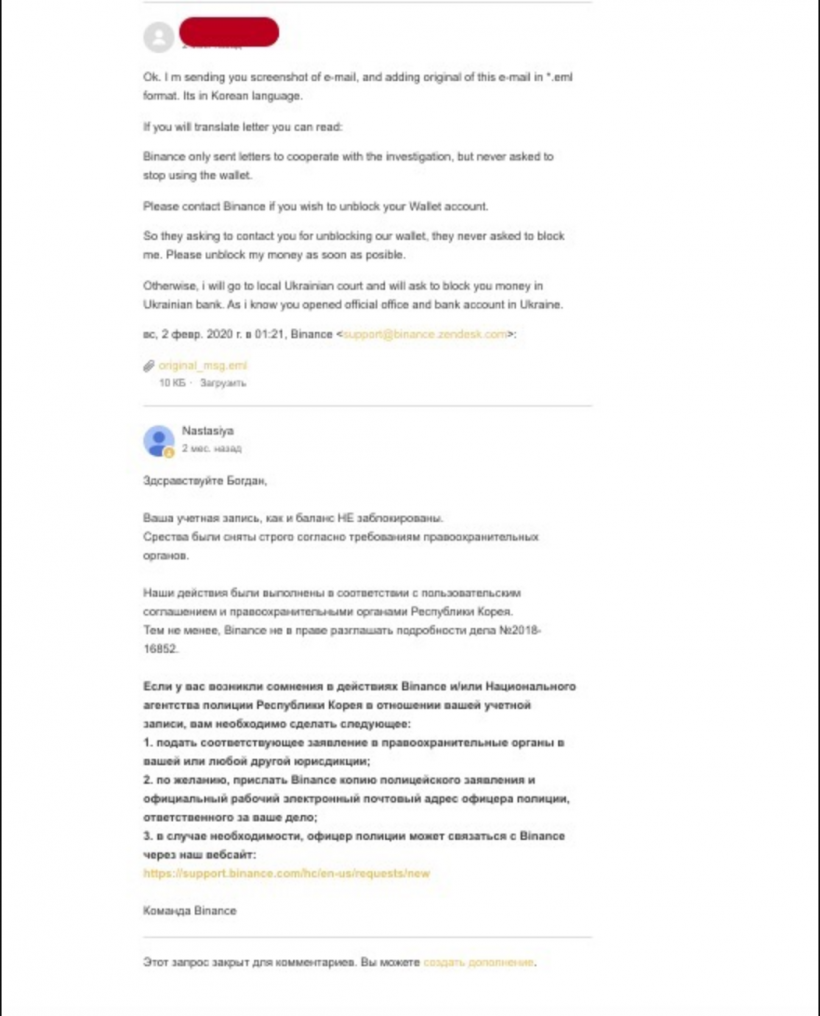 “I have every reason to believe that Binance misappropriated my money for itself. Communication with them continues from November 21, 2018. It has been 18 months already,” the user emphasized.

HackControl has already discovered similar cases, and the total damages are estimated at more than $3 million. The victims are preparing a class action lawsuit and are going to levy criminal charges against the exchange.

Coincidently, on April 3, lawsuits were filed in the United States against Binance and 10 other Bitcoin companies. They were accused of selling unregistered securities.