Bank of France to Test CBDC Contributing to Wider Effort

The Bank of France announced a CBDC experiment and is open to applications. The test is a part of the larger move towards introducing central bank digital money in the EU and is aimed to explore solutions for interbank settlement.

In this piece, we take a look at the details of the French CBDC initiative and put it alongside similar ongoing experiments, plans, and efforts in other countries.

On March 30th, the French Central Bank called for applications “to experiment with the use of a digital euro issued for interbank settlements.“ The initiative delivers on the central bank’s earlier promise to test CBDC in Q1 2020.

According to the Call for applications package released on March 27, the goal of the experiment is to explore the financial, monetary, and legal consequences of introducing a CBDC and test three particular use cases:

The solutions submitted by those willing to participate should address at least one of these use cases and introduce a digital token or “or any other dematerialization process” as the means of payment. There are no restrictions on the underlying technology used in proposed solutions, meaning that the central bank welcomes both blockchain and non-blockchain systems.

The deadline for submitting applications is May 15th, 2020. The Bank of France will pick up to 10 submissions to proceed with. The selection procedure is scheduled for July 10th, after a period allocated for review and interviews with the development teams.

The criteria for the proposals include the amount of innovation, resource costs, security, and confidentiality. Moreover, the system is expected to allow for transaction data management and tokenization of central bank money or otherwise dematerialization thereof, as well as establish a business process for the token to be used for payment and financial instrument settlement. It should also have the tools of control and supervision for the authorities.

Importantly, the token or an analog solution to be introduced will not have any legal power. It will be used to represent a certain amount of central bank money in euro, but all such tokens will be destroyed at the end of each respective accounting day.

The organizers of the experiment also stated that the experiment is not going to be perpetuated. The actual solutions taking part in the tests will not necessarily be used in the future:

Another side note is that the development teams willing to participate will have to pay their own bills.

Still, while there is no reason to be too excited about the Bank of France’s move to innovation, it is an important step in the shift to central bank digital money taking place in the EU and the rest of the world.

While the key principles laid out by the Bank of France for their current CBDC experiment revolve around the digital money to use in wholesale transactions between banks and other financial institutions, the ongoing CBDC testing in Sweden looks for a retail solution.

Announced on February 20th, 2020, e-krona, also referred to as digital krona, is a joint pilot project by the Riksbank, Sweden’s central bank, and Accenture, seeking to explore the use of a central bank digital money by the general public. The project will run until February 2021 and may be extended.

“A digital krona should be simple, user-friendly as well as fulfill critical requirements for security and performance. In the test environment, simulated users shall be able to hold e-kronor in a digital wallet, make payments, deposits, and withdrawals via a mobile app,” reads the press release.

The solution is expected to be based on a distributed ledger, namely R3’s Corda open-source blockchain platform. The network for e-krona is designed as a permissioned blockchain accessed only by the Riksbank-approved participants: banks and other financial institutions. These participants run network nodes, so the process involves processing and validating transactions and storing e-krona tokens, representing the central bank digital money. The Riksbank will act as the only issuer of e-krona.

End users are meant to hold their e-krona in digital wallets accessible via mobile apps, wearables, and cards. The project also explores the possibility of offline transactions with e-krona. 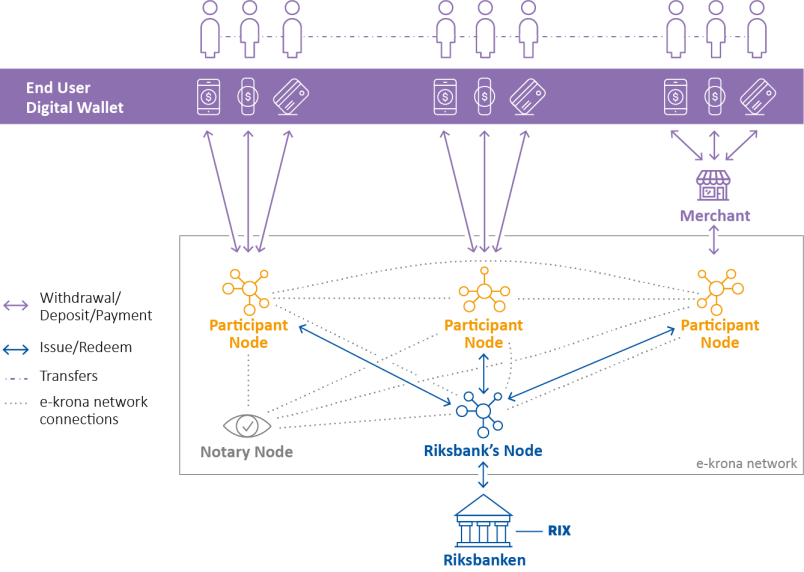 The conceptual architecture for the e-krona pilot. Source: Accenture via Riksbank

Importantly, the test in question is an isolated simulated study and considers just the technical solution. There are no decisions on the actual issuance of e-krona, its design, and underlying technologies.

“The technical solution will be evaluated in a test environment, in which participants and interactions with the existing infrastructure and settlement systems will be simulated,” stressed the Riksbank.

While at the similarly early stages of development, the Swedish and French CBDC testing projects aim at two distinct forms of central bank digital money, both of which are important in the future real-life implementation of CBDC.

France and Sweden are certainly not alone in their efforts towards CBDC development.

The Bank of England has recently published a discussion paper evaluating the pros and cons of a central bank digital currency pegged to the British pound. In the paper, the central bank outlined the concept of “digital banknotes” to be used by the general public similar to the existing cash.

The Bank of England also stressed that CBDC and cryptocurrencies are not the same:

“CBDC would be something fundamentally different from ‘cryptocurrencies’, such as Bitcoin. Many crypto-assets are privately issued and not backed by any central party. They are not considered a currency or money because they do not perform the essential functions of money: they are too volatile to be a reliable store of value, they are not widely accepted as a means of exchange, and they are not used as a unit of account.”

Similarly, they argued that a CBDC doesn’t have to be built on blockchain, although there are potential benefits in using distributed ledger technologies:

“Although CBDC is often associated with Distributed Ledger Technology, we do not presume any CBDC must be built using DLT, and there is no inherent reason it could not be built using more conventional centralized technology. However, DLT does include some potentially useful innovations, which may be helpful when considering the design of CBDC. For example, elements of decentralization might enhance resilience and availability, and the use of smart contract technology may enable the development of programmable money.”

Reportedly, China is also making progress with its CBDC development. According to the Global Times’ insider sources, the People’s Bank of China together with a group of private companies have “completed development of the sovereign digital currency’s basic function” and moved on to drafting the necessary laws. For China, the introduction of CBDC may present a tool to “translate a central bank’s zero and negative interest rate policy into commercial banks,” which would be helpful during the recession.

“If there is a chance China is considering lowering its interest rate into negative territory as a final option and directing such policy to commercial loans and lending, a circulated digital currency rather than M0 will be able to achieve that,” Cao Yan, managing director of Digital Renaissance Foundation, told the Global Times.

The Central Bank of the Bahamas rolled out its pilot CBDC project back in December 2019. They introduced a digital version of the Bahamian dollar for a part of the country as a potential way of dealing with cash-related inefficiencies and discriminatory practices.

“It would permit wireless restoration of payments connectivity, avoiding the cash shipment and cash handling frustrations. It would permit electronic dispersing of aid and allow families to recapture personal dignity by restoring the flexibility to prioritize the elements of a personal need that they prefer to satisfy post-disasters,” said the governor of the Bahamian central bank John Rolle.

Many other countries across the world are at least considering the idea of central bank digital money and the global crisis caused by the coronavirus pandemic and the resulting lockdown is likely to act as a catalyst for the actual change, at least to an extent. Although the current efforts may seem limited, these pilot projects will lay the foundation of future infrastructures.